Minnesota Twins ace Jose Berrios is being floated in MLB trade rumors and with so many contenders desperate for front-line pitching, he could be the biggest name moved at the MLB trade deadline.

So much has gone wrong for the Twins this season. Injuries have certainly played a role, with key players like Byron Buxton and Kenta Maeda missing significant time. While there’s still some time for things to turn around, the Twins’ path towards selling this summer is becoming clearer.

If Minnesota decides to sell off its assets, its phone won’t stop ringing. Buxton, Michael Pineda, Andrelton Simmons, Nelson Cruz and Taylor Rogers are among a long list of players who will generate interest. But there is one player who every team will ask about first.

Let’s examine four landing spots for a Jose Berrios trade with potential costs for each club.

Boston’s lineup is outstanding and the front office should be confident in its production even without making additions at the trade deadline. But if the Red Sox want to make a serious run in October, the rotation (4.47 ERA) needs upgrades. Getting Chris Sale back will help, but this team needs a starter to add to the front of its rotation

Berríos fits the Red Sox for a variety of reasons. For one, he is under team control through 2022 and his final season of arbitration eligibility should fit into Boston’s payroll. He is also poised in the playoffs, allowing just one run in his last two October starts.

If the Red Sox rotation features Sale, Berrios and Eduardo Rodriguez, that is a trio this team can have confidence in against quality opponents. While it might cost Boston some top prospects, Chaim Bloom excels at identifying young talent to develop.

Toronto boasts a lineup capable of competing in October, but it lacks the pitching staff (4.24 ERA) to compete in an ALDS. There will be a few mid-rotation arms available and the front office should explore them but finding a No. 2 starter must be the priority. MLB Network’s Jon Morosi first reported Berrios as a potential target for the Blue Jays and it makes sense. 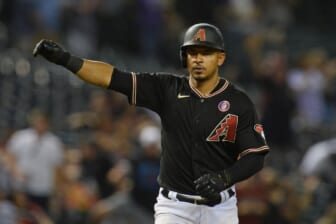 If Max Scherzer isn’t available, Berrīos needs to be the player Toronto calls about regularly. The 27-year-old is on a roll as of late, posting a 3.13 ERA and 32/6 K/BB ratio across his last five starts. Keep in mind, he is doing all of this at a time when morale on his team is extremely low. With a good ability to miss bats (26% strikeout rate) and a team-friendly contract, Berrīos is exactly the pitcher the Blue Jays need in Game 2 of a playoff series.

The Mets rotation is fascinating. Everyone expected it to shine this year, especially when Carlos Carrasco and Noah Syndergaard returned. Neither starter is coming back anytime soon, but New York holds the lowest rotation ERA (2.79) in baseball. Jacob deGrom is certainly the driving force behind that and with his recent injury scares it would be smart to add another front-line starter.

Berríos is exactly the kind of player worth paying up for and this could work out nicely for New York. Brett Baty didn’t start the season as a top-100 prospect, but his dominant season is sending his stock soaring. Meanwhile, Ginn is back from Tommy John Surgery and should start demonstrating why many viewed him as a first-round talent pre-TJS.

With Syndergaard out until September, if not longer, Berrīos can step in. He’d be inserted as New York’s third starter, giving this team one of the best No. 3 pitchers in MLB. That can make a huge difference in a seven-game series. Best of all for New York, Berrīos would still be around in 2022.

There is no team more desperate for pitching than the St. Louis Cardinals. The statement was true before Jack Flaherty’s injury and his long-term absence only made the situation worse. In a desperate spot, St. Louis needs to go after the best pitchers available and Berrīos is the most logical fit.

Berríos would immediately become the Cardinals’ ace, bumping everyone down into roles they are more suited for. Moving to the National League might also help him lower his ERA, especially with an organization that has done some nice work with young arms. Many in St. Louis might want Max Scherzer, but he’s a rental and his contract may scare Cardinals’ ownership away. That’s why, even at the cost of trading Gorman, Berrios fits.