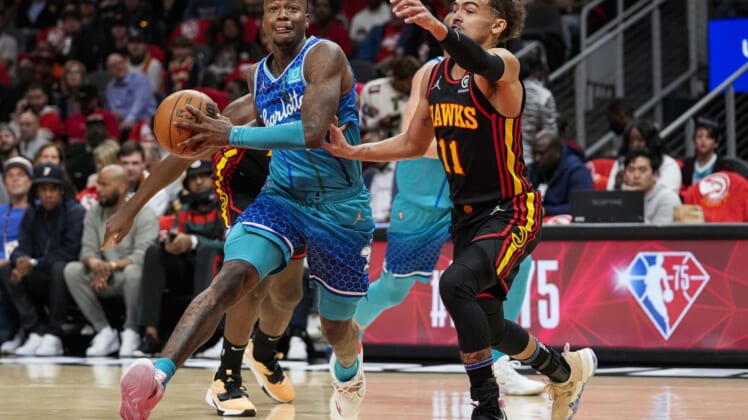 Trae Young scored 14 of his 24 points in the third quarter as the Atlanta Hawks pulled away to rout the visiting Charlotte Hornets 132-103 in the Eastern Conference play-in round Wednesday night.

DeAndre Hunter provided 22 points for the ninth-seeded Hawks, while Danilo Gallinari posted 18 points, Clint Capela put up 15 points and 17 rebounds and Kevin Huerter and Bogdan Bogdanovic both had 13 points.

Atlanta goes to Cleveland on Friday night for the next phase of the play-in round, with the winner claiming a spot in a playoff series as the No. 8 seed in the Eastern Conference — moving on to face the top-seeded Miami Heat in the opening round of the postseason.

The Hornets bowed out with a road game in the same round for the second year in a row. Charlotte has not made the playoffs since the 2015-16 season.

The Hawks made 16 of their 32 attempts from 3-point range, though Young was just 1-for-7. That was part of the team’s 52.1-percent shooting overall from the field.

Charlotte shot 37.8 percent from the floor.

Atlanta built a 102-76 lead through three quarters after posting a 42-24 advantage in the third quarter.

The Hornets cut a 51-38 deficit to 58-52 and had a chance to pull closer in the waning seconds of the first half. Instead, Young drained a jumper in transition for a 60-52 edge at the break.

Ball and Young were both 3-for-13 from the field in the first half.

The Hawks led 32-23 after the first quarter despite Young posting only four points on 1-for-9 shooting from the field.