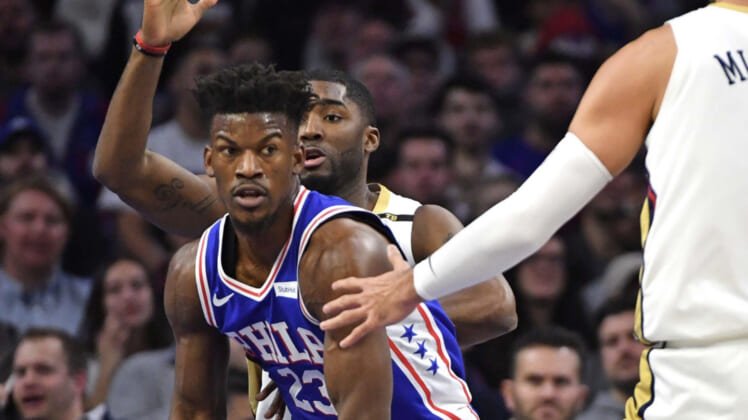 The Miami Heat pulled off one of the biggest moves of NBA free agency Sunday evening, acquiring All-Star wing Jimmy Butler from the Philadelphia 76ers in a sign-and-trade.

It’s a trade that could shake up the NBA on a day that has seen Kevin Durant and Kyrie Irving team up with the Brooklyn Nets. Here’s the biggest takeaways from the blockbuster Jimmy Butler trade.

Sixers did well to add something

It seemed to be a foregone conclusion that Philadelphia was going to lose Butler less than a calendar year after trading for him. The good news here is that these Sixers were able to get something for the All-Star. That includes a 25-year-old wing in Josh Richardson who averaged 16.6 points, 3.6 rebounds and 4.1 assists for Miami last season.

Richardson will slot in well at the two-guard position. He’ll team up with Joel Embiid, Tobias Harris, Ben Simmons and the recently signed Al Horford to form an elite starting five in Philly.

It was reported earlier in the weekend that Los Angeles was looking to team Butler up with Kawhi Leonard in free agency. The idea behind this was to build an elite twosome to compete with Anthony Davis and LeBron James in Hollywood.

While Leonard’s status remains up in the air, the Clippers missed out on the opportunity to sign Butler. That’s a major loss for a team that has max-contract space, especially after Kevin Durant decided to sign with the Brooklyn Nets.

The Heat are not contenders

Even after adding Jimmy Buckets to the mix, Miami can’t be considered top-end contenders in the Eastern Conference. Did the team even get better by moving three parts for Butler? An honest debate could be had over that.

What we do know is that unless Miami is able to add another star (Bradley Beal?), the team is going to be a bottom-end playoff contender back east. Picking up Butler does not change this.