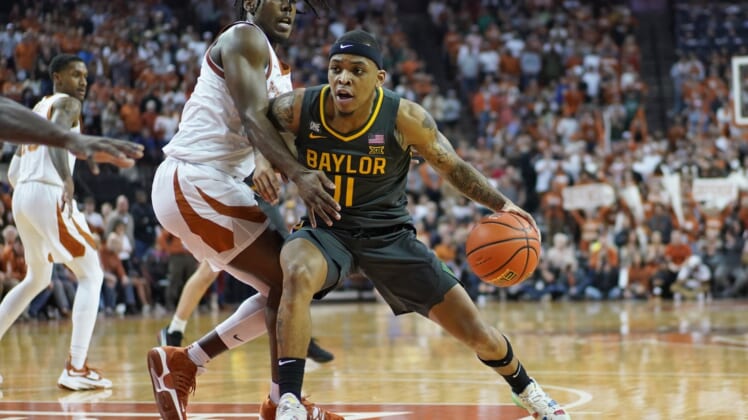 Adam Flagler and James Akinjo scored 19 points each as No. 3 Baylor turned up the heat in the final five minutes to beat No. 21 Texas 68-61 on Monday in a key Big 12 Conference game at Austin, Texas.

The Bears trailed by three at halftime but rallied to take the lead 4 1/2 minutes into the second half, eventually building a five-point edge. Texas fought back to tie the game at 54 with 6:21 left, but that’s when Baylor took charge, holding the Longhorns scoreless for nearly five minutes and completing a sweep of the season series.

Baylor (25-5, 13-4 Big 12), which won its fourth straight game, remains in the running for the conference regular-season championship with a game at home against Iowa State still on the schedule.

Davion Warren scored 23 points as the Red Raiders beat the Wildcats in Lubbock, Texas, to finish the season 18-0 at home.

Texas Tech (23-7, 12-5 Big 12) finished the game on an 8-3 run to bounce back from a Saturday loss at TCU. The Red Raiders got 19 points from Bryson Williams plus 10 points and six assists from Adonis Arms.

Kansas State (14-15, 6-11) played without second-leading scorer Markquis Nowell, who sustained a hamstring injury late in the team’s Saturday loss against Iowa State. The Wildcats, who lost their fourth straight, were led by Mike McGuirl with a season-high 18 points.

Jaime Jaquez Jr. scored a career-high 30 points on 11-of-17 shooting from the floor and the Bruins rode a 26-8 run over the first 10:02 of the second half to a win over the Huskies in Seattle.

UCLA (22-6, 14-5 Pac-12) shot just 10 of 29 from the floor in the first half and went into halftime down by four points. The Bruins responded with renewed defensive intensity, holding Washington scoreless for the first 4:18 of the second half.

The Bruins prevailed even though season-long leading scorer Johnny Juzang (ankle) sat out a second consecutive game. Terrell Brown Jr. finished with 20 points for Washington (14-14, 9-9), which lost for the fifth time in six games.

Keegan Murray scored 26 points and grabbed 18 rebounds as the Hawkeyes led almost wire to wire in a rout of the Wildcats in Iowa City.

Ty Berry came off the bench to score 19 points for the Wildcats (13-15, 6-13) and Ryan Young, another reserve, chipped in 10 points and seven rebounds. Boo Buie, the team’s second-leading scorer, played only six minutes before leaving with an illness.