Top 25 College Basketball Roundup: No. 5 Duke prevails in high-profile matchup with No. 1 Gonzaga 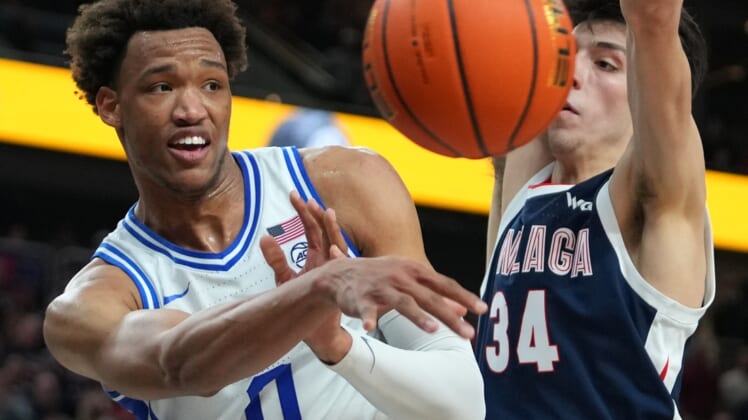 Paulo Banchero scored 20 of his 21 points in the first half and the No. 5 Blue Devils held off the top-ranked Bulldogs 84-81 in the Continental Tire Challenge before a capacity crowd at T-Mobile Arena in Las Vegas.

Wendell Moore Jr. added 20 points for the Blue Devils (7-0), including some clutch free throws down the stretch, and Mark Williams had 17 points on 8-of-9 shooting from the field and nine rebounds.

Mustapha Amzil hit a high-arching shot from the lane for a buzzer beater as the Flyers stunned the No. 4 Jayhawks 74-73 in the semifinals of the ESPN Events Invitational at Kissimmee, Fla. The victory pushes the Flyers into the tournament championship game on Sunday.

Still, the Flyers trailed by three points inside the final minute before Malachi Smith connected with 44 seconds left and Dayton got the ball back on a charging call against the Jayhawks’ David McCormack. McCormack blocked a shot by Smith before Amzil retrieved the miss and put up his game-winner that bounced high off the front rim before dropping in.

James Akinjo scored 15 points and Kendall Brown added 12 to lead the Bears to a victory over the Spartans in the Battle 4 Atlantis title game in Paradise Island, Bahamas.

Adam Flagler had 11 points and five assists, while Jonathan Tchamwa Tchatchoua added 10 points for the defending national champion Bears (7-0), who won their 31st consecutive nonconference game. LJ Cryer, Matthew Mayer and Jeremy Sochan each added eight points for the Bears, who shot 49.2 percent from the field, including 26.9 percent (7 of 26) from 3-point range.

Gabe Kalscheur poured in a game-high 30 points as the Cyclones won the NIT Season Tip-Off, leading almost wire to wire in a triumph over the Tigers in Brooklyn, N.Y.

Kalscheur canned 10 of 18 shots and grabbed eight rebounds for the Cyclones (6-0), who seem ticketed for the Top 25 on Monday after defeating No. 25 Xavier on Wednesday night before handing the Tigers (5-1) their first loss. Tristan Enaruna and Aljaz Kunc each added 11 points for the Cyclones, who enjoyed a 28-16 advantage in points in the paint.

Emoni Bates scored 12 points for Memphis, which struggled offensively for the second straight game. After making only 39.3 percent of their shots Wednesday night while beating Virginia Tech 69-61, the Tigers hit just 35.8 percent on Thursday while mixing in 22 turnovers that led to 23 Iowa State points.

Oscar Tshiebwe collected a double-double and four of his teammates scored in double figures as the Wildcats pulled away after a slow start to rout the Ospreys in Lexington, Ky.

Tshiebwe finished with 12 points and 16 rebounds for the Wildcats (5-1), who won their fifth straight game since a season-opening loss to Duke. Dontaie Allen and TyTy Washington Jr. each scored 14 points, while Sahvir Wheeler and Daimion Collins added 12 points apiece.

Jadyn Parker came off the bench to score 10 points for the Ospreys (1-6), who entered the game as one of the top 3-point shooting teams in Division I. However, the team that bills itself as the “Birds of Trey” made just 7 of 31 (22.6 percent) from behind the arc against a taller, quicker foe.

Zach Edey scored 20 points on a near-perfect shooting performance and the No. 3 Boilermakers had no trouble in a 97-40 win over the Mavericks in a nonconference game on Friday in West Lafayette, Ind.

Edey was 6-for-7 shooting from the floor and 8-for-8 from the free-throw line in 16 minutes on the court, with Trevion Williams posting a double-double with 14 points and 10 rebounds in 21 minutes for the Boilermakers (6-0).

Brandon Newman made three four-pointers during his 16-point performance, while Jaden Ivey added 12 points on 5-for-6 shooting as Purdue led by as many as 58 points in the second half.

Reserve Brandon Huntley-Hatfield had eight of his 12 points in a momentum-changing run that put the Volunteers ahead for good as it held off the upset bid of the Golden Eagles and went on to a victory in Knoxville, Tenn.

Olivier Nkamhoua scored 18 points on 8-for-8 shooting, Kennedy Chandler had 15 and John Fulkerson had 14 for the Volunteers (4-1). Santiago Vescovi added 13 points, seven rebounds and seven assists.

Jabari Smith collected 22 points, six rebounds and four assists as the Tigers routed the Orange in the fifth-place game of the Battle 4 Atlantis tournament in Paradise Island, Bahamas.

Smith made 8 of 17 shots from the field and four of his eight 3-point attempts. K.D. Johnson finished with 15 points and Devan Cambridge had 10 for the Tigers (5-1), who shot 50.7 percent from the field and outrebounded Syracuse 38-28 in the victory. Auburn made 12 of 30 shots from 3-point range and had a 42-26 advantage in points in the paint.

Isaiah Whaley returned from a one-game absence and hit the tiebreaking 3-pointer with 3:54 remaining in overtime as the Huskies earned a victory over the Rams in the third-place game of the Battle 4 Atlantis at Paradise Islands, Bahama.

Whaley scored 16 points after sitting out Thursday’s four-point loss to Michigan State as a precaution after he fainted following UConn’s double-overtime win over Auburn. R.J Cole led UConn (6-1) with a season-high 26 points as the Huskies survived shooting a season-worst 33.3 percent and withstood committing 22 turnovers. Andre Jackson grabbed 14 rebounds to help UConn to a 52-35 advantage on the boards.

Jayden Nunn scored 21 points but was the only Rams player to reach double figures. Vince Williams was held to nine points on 3-of-14 shooting as VCU (3-4) shot 35.5 percent, misfired on 16 of 21 3-point tries and missed 10 free throws to negate a defensive showing that totaled nine steals and eight blocks.

Noah Gurley’s basket put the No. 10 Crimson Tide ahead to stay and Crimson Tide used a late run to avoid being upset for the second consecutive day, holding off the Bulldogs, 80-71 in the consolation round of the ESPN Events Invitational in Lake Buena Vista, Fla.

Alabama (5-1), which had been upended by Iona on Thursday, will face Miami (4-2) on Sunday in the fifth-place game.

Jahvon Quinerly scored 18 points and Juwan Gary had 14 points and 10 rebounds for Alabama. D.J. Wilkins scored 17 points for Drake. DeVries and ShanQuan Hemphill each added 15 for the Bulldogs (3-2).

Nate Johnson hit a go-ahead 3-pointer with 25 seconds left as the Musketeers survived the Hokies in the third-place game of the NIT Season Tip-Off in Brooklyn, N.Y.

In a matchup of teams coming off their first loss of the season, the Musketeers (5-1) persevered thanks to Johnson’s shot from the left wing and a pair of misses from the Hokies (5-2) in the final seconds. Johnson finished with a career-high 30 points on 10-of-14 shooting, including a 7-of-11 effort from outside the arc. Jack Nunge contributed nine points and 14 rebounds for the Musketeers.

Junior Kofi Cockburn poured in a career-high 38 points as the No. 14 Illini avoided a major upset at the hands of the Vaqueros, pulling out a 94-85 win in Champaign, Ill.

Cockburn, whose previous career best was 33 points last December against Minnesota, canned 15 of 19 field-goal attempts and 8 of 11 free throws. He added 10 rebounds for his second double-double in a row for Illinois (4-2).

Alfonso Plummer gunned in 30 points in support of Cockburn, converting 6 of 11 3-point attempts and all eight of his foul shots.

The No. 24 Trojans held San Diego State to 32.1 percent shooting from the floor en route to a comfortable win in the championship game of the Wooden Legacy on Friday in Anaheim, Calif.

Goodwin and Mobley also each blocked two shots, contributing to the all-around stellar defensive effort the Trojans put forth. The Trojans’ stifling play limited all but Trey Pulliam, who scored 11 points, to single digits for the night.