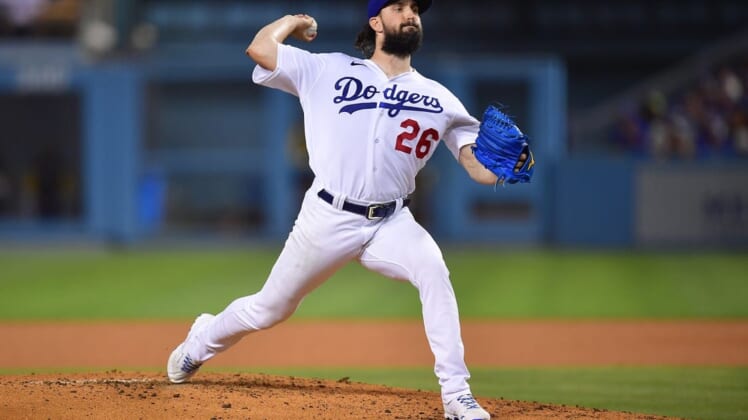 Freddie Freeman added three hits and four RBIs of his own as the Dodgers rebounded from a defeat to the Brewers on Monday that ended their nine-game home winning streak.

Despite giving up a run on three hits and two walks with three strikeouts, Gonsolin (16-1) was able to lower his ERA to 2.10.

Gonsolin, who tied the Houston Astros’ Justin Verlander for the major league lead in wins, took over the NL ERA lead when the Dodgers scored six runs against the Miami Marlins’ Sandy Alcantara on Sunday.

Jonathan Davis had an RBI single for the Brewers, who can still win the season series over the Dodgers with a victory in Wednesday’s series finale. The teams have split six games over the past nine days.

The Dodgers struck early against Brewers ace Corbin Burnes (9-6), getting a Mookie Betts leadoff double in the bottom of the first inning and a one-out RBI single from Freeman.

In the second inning, Joey Gallo and Cody Bellinger walked and Thompson hit a three-run home run deep into the left-field bleachers, his sixth.

Los Angeles increased the lead to 7-0 in the fourth inning, getting RBI singles from Thompson, Trea Turner and Freeman. Burnes was removed after Turner’s single with Freeman connecting off Milwaukee left-hander Brent Suter.

Burnes gave up a season-high seven runs on six hits, while matching a season low with 3 2/3 innings. He had two walks and three strikeouts.

Burnes’ struggles against the Dodgers continued with his ERA against Los Angeles rising to 10.00 in six career appearances (four starts).

Gonsolin and Burnes were college teammates for three seasons (2014-16) at St. Mary’s in Moraga, Calif.