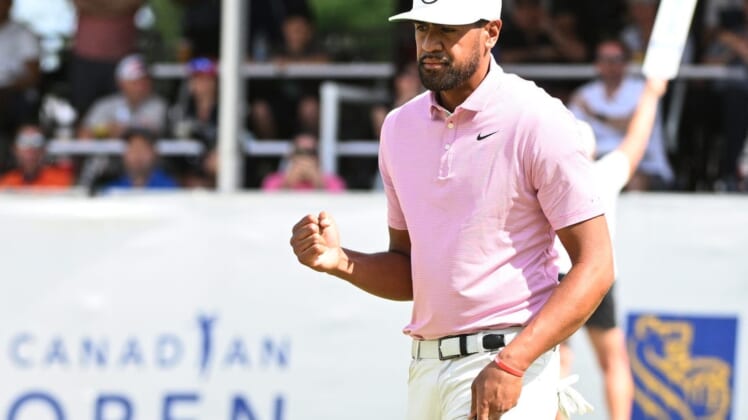 A masterful 8-under 62 on Saturday propelled Tony Finau into a first-place tie with Rory McIlroy of Northern Ireland at the Canadian Open in Toronto.

Both golfers sit at 11-under 199 after three rounds, two strokes ahead of the field.

A three-shot eagle on hole 9 was the highlight of Finau’s day, and the 32-year-old two-time PGA Tour victor added seven birdies on top of his eagle against a single bogey to forge into the first-place tie. Finau recorded birdies on 1, 6, 8, 10, 11, 14 and 18.

“Yeah, I played nicely,” Finau said. “I didn’t finish the way I wanted to yesterday and I think all it did was kind of light a fire in my belly to get after it today. That’s pretty much what I did. I made some birdies and I just played really clean golf.

“Then when I made an eagle on 9 I kind of knew then I was like, oh, wow, we’re climbing up that leaderboard. And any time you’re at the top of the leaderboard and have a chance to win on a Sunday on the PGA TOUR it’s exciting. So I’m happy with the round.”

McIlroy, who vaulted into second place the day before, sits tied with Finau after shooting 5 under. His day included six birdies over a 12-hole stretch.

He also had a bogey on 8, but a shot out of the rough on 9 set up a birdie to recover the stroke.

“Yeah, that was probably low key one of the best shots I’ve hit all year,” McIlroy said. “The lie wasn’t great in the rough, it was good enough for me to at least think I had a chance. I opened the face on a 5-iron and I went down the grip a little bit. And out of the rough like that all I think is just try to get your hands as high as possible at the top of the swing and then just hit it as hard as you can. It came out perfectly.”

Neither golfer is set to proclaim victory with four players sitting two strokes back at 9 under.

Justin Thomas recorded a 7-under 63, Sam Burns had a 5-under 65, Friday’s leader Wyndham Clark shot a 2-under 68, and Alex Smalley hit a 3-under 67 to create a four-way tie in third place.

“There’s no other place I would want to be playing and it’s just, obviously with a tournament like this and the history that it has and how long it’s been played, had a lot of great past champions and venues and drama,” Thomas said. “And it looks like it has a potential tomorrow to produce a little bit more of that and create some more history.”

Four strokes behind the leaders are Austin Cook (68) and Jim Knous (69), who sit in a seventh-place tie.

Six more golfers are at 6 under, tied for ninth at five strokes back: Sebastian Munoz of Colombia, Chris Kirk, Adam Long, Doug Ghim, Matt Fitzpatrick of England, and Keith Mitchell.