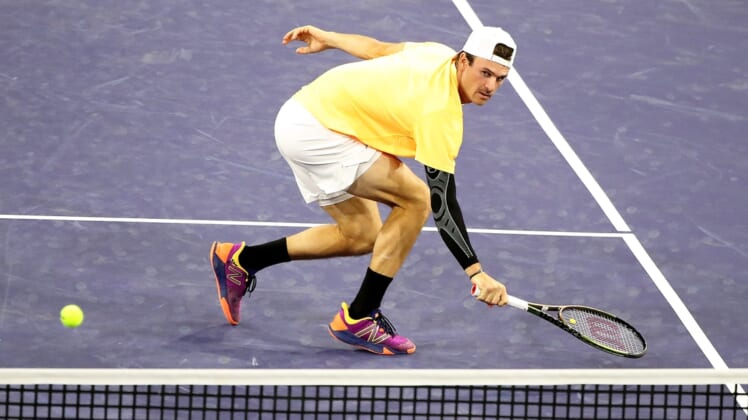 American Tommy Paul outlasted third-seeded Alexander Zverev of Germany in the third-set tiebreaker to win their round of 64 match late Sunday at the BNP Paribas Open in Indian Wells, Calif.

The score was 6-2, 4-6, 7-6 (2), and the tiebreaker proved anti-climactic when Zverev lost serve twice and fell behind 5-1. Paul failed on his first match point but broke Zverev to close out the match.

“It’s great, I played at a really high level today,” said Paul. “Last time I played him, I played well, I put pressure on him. I knew how I wanted to play him, and I came out and I executed that well.

“Obviously, it got kind of crazy there in the second set and I got lucky a little bit in the end, but I played well when it came down to the breakers, so I’m pretty happy with my performance.”

Next up for Johnson is a match against Poland’s Hubert Hurkacz, the 11th seed, who needed three sets to advance past Oscar Otte of Germany, 6-3, 3-6, 6-3.

Hurkacz, who posted 16 aces, lost serve in the third set to trail 3-2 before breaking Otte to tie it and then won the final three games as well.

van de Zandschulp failed on three match points, but he gave credit to Auger-Aliassime as well.

“Of course you’re a little bit frustrated if you have match points in the second set. It’s not like I missed any shots, but he played some great points. It’s a little bit easier than when you are missing chances. I thought I was playing well and that’s how I continued in the third.”

Murray, of Great Britain, fell in straight sets to 31st-seeded Alexander Bublik of Kazakhstan, 7-6 (9), 6-3. Serve held in the first set until the tiebreaker, when Murray lost serve on five points and Bublik four.

After Bublik failed on back-to-back set points early in the tiebreaker, Murray missed on three opportunities of his own before Bublik wrapped it up on his next chance.

The win by Bublik was a long time coming as he twice previously had lost to Murray.

“For me, it’s great to have a win here. It’s really tennis paradise. To beat Andy, finally – if he would be my age, it would have been a lot tougher,” he said.