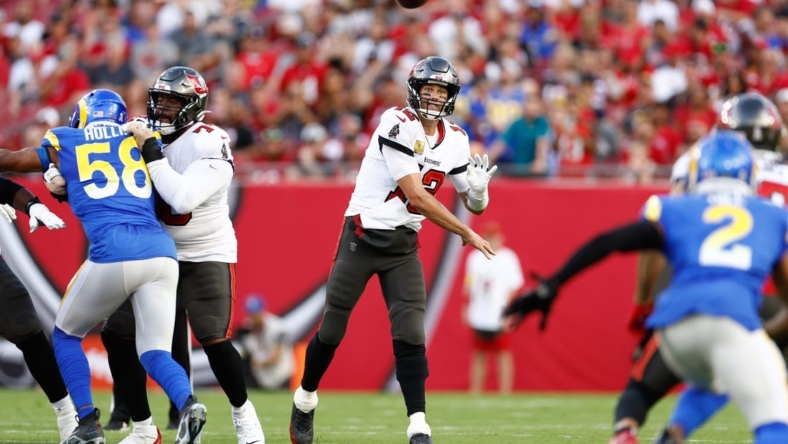 Tom Brady became the first quarterback in NFL history to throw for 100,000 yards, counting playoff games, and led a last-minute drive Sunday to pace the host Tampa Bay Buccaneers to a 16-13 win over the Los Angeles Rams.

Brady drove Tampa Bay (4-5) 60 yards in 35 seconds with no timeouts, finding rookie tight end Cade Otton for a 1-yard touchdown pass with nine seconds remaining. Otton’s 28-yard catch over the middle on the drive’s first play pushed the Bucs into Los Angeles territory and a pass interference call in the end zone made it first-and-goal.

Brady completed 36 of 58 passes for 280 yards as the Buccaneers won for just the second time in seven games and moved into a tie with Atlanta for first place in the NFC South.

Matthew Stafford hit just 13 of 27 attempts for 165 yards and a touchdown for the Rams (3-5), who now trail Seattle by 2 1/2 games in the NFC West. Los Angeles has been outscored 71-10 in the fourth quarter this year.

Ryan Succop kicked three field goals for Tampa Bay, its only points until Brady assured his record-setting effort would come as part of a much-needed win.

In a rematch of January’s NFC Divisional Round classic, won by Los Angeles on a last-play field goal by Matt Gay, the teams spent the first half demonstrating why neither is anywhere near that level in 2022.

Tampa Bay initiated scoring on its first possession, controlling the ball for more than 6 1/2 minutes before settling for Succop’s 20-yard field goal at the 7:16 mark of the first quarter.

The Rams didn’t run a single play from the Buccaneers’ half of the field, but still made one big play to take a lead into halftime. That was Stafford’s 69-yard touchdown pass to Cooper Kupp just over two minutes into the second quarter. Kupp broke open down the numbers on the right side and Stafford hit him in stride for his sixth score in eight games.

Gay made a 35-yard field goal with nine seconds left in the third quarter to give the Rams a 13-6 lead before Tampa Bay’s comeback.