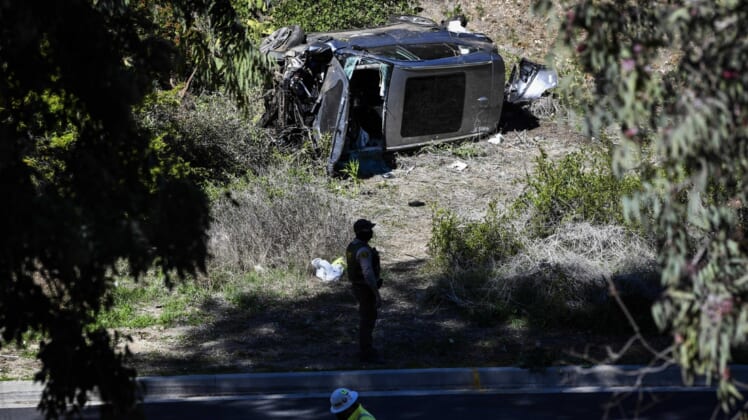 Feb 23, 2021; Rancho Palos Verdes, CA, USA; The vehicle of Tiger Woods after he was involved in a rollover accident in Rancho Palos Verdes on February 23, 2021. Woods had to be extricated from the wreck with the "jaws of life" by LA County firefighters, and is currently hospitalized. Mandatory Credit: Harrison Hill-USA TODAY

Documents made public Friday note that the first person to reach Tiger Woods after the golfer’s rollover crash last month found him unconscious in the mangled SUV.

A police affidavit says the man, who is not named, told them he heard the crash near his Rolling Hills Estates home and walked to the accident, where he found Woods with his face and chin covered in blood. The man said he tried to speak to Woods but was unable to get a response.

Law enforcement previously had not disclosed that Woods had lost consciousness.

By the time first responders arrived, Woods apparently had come to, and they reported him as “calm and lucid” as he was pulled him from the wreck.

In the paperwork, police say Woods said he couldn’t remember driving, and that deputies had to tell him he had been in a crash. Woods is being treated for multiple serious leg injuries, which required surgery.

The documents were filed by the Los Angeles County Sheriff’s Department as part of its effort to obtain the SUV’s data recorder for the ongoing investigation into what caused the crash.