Tiger Woods struggles to first-round 78 at The Open 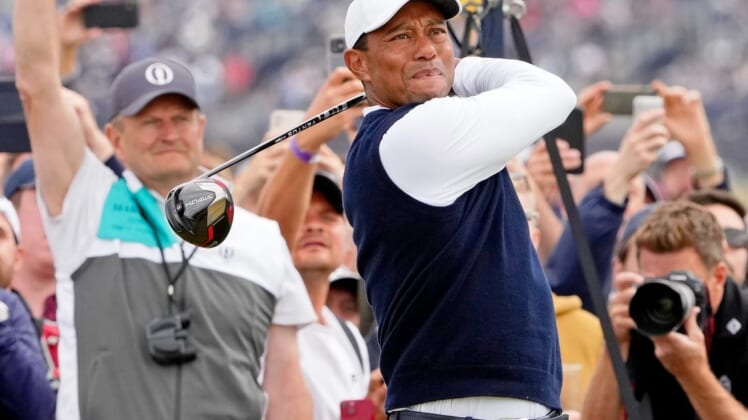 In his first official event in two months, Tiger Woods couldn’t recover from a stroke of bad luck on the opening hole and wound up with a 6-over-par 78 Thursday in the first round of The Open Championship at St. Andrews in Scotland.

Woods made double bogeys at the first and seventh holes, precipitating a quick drop to 6 over, before three birdies and three bogeys took him the rest of the way. As he walked off the course, he was tied for 146th out of 156 golfers in the field.

Woods’ first tee shot found a divot in the fairway, and upon hitting his approach, he had to turn his head away to keep from soil blowing into his eyes. The shot bounced well short and into Swilcan Burn, a creek guarding the front of the green.

He had to take a drop, and once on the green, he missed his putt for bogey.

Woods’ first birdie came at the par-4 9th, where he drove his tee shot over the green and chipped to set up an 8-foot birdie putt. He made it two in a row by landing his approach shot at the par-4 10th 4 feet from the pin.

But he three-putted for bogey at the par-3 11th and only made one more birdie the rest of the way, the par-5 14th. He finished with five bogeys along with the two doubles.

Woods last played at the PGA Championship in May, where he withdrew after the third round due to ongoing pain in his surgically repaired right foot and leg. Not wanting to miss the 150th playing of The Open at the birthplace of golf, where he won in 2000 and 2005, Woods skipped last month’s U.S. Open to continue recovering.

He has played only the Masters, the PGA Championship and The Open since recovering from injuries sustained in a single-car accident in February 2021. Woods also competed at a two-day pro-am event in Ireland last week to tune up for Open golf.

After Friday’s second round is complete, the top 70 players and ties will make the cut. Woods will need to shoot a low round Friday to give himself a chance.

Woods is playing his first two rounds with U.S. Open champion Matt Fitzpatrick of England and Max Homa. The group tees off at 9:58 a.m. local time (4:58 ET) on Friday.