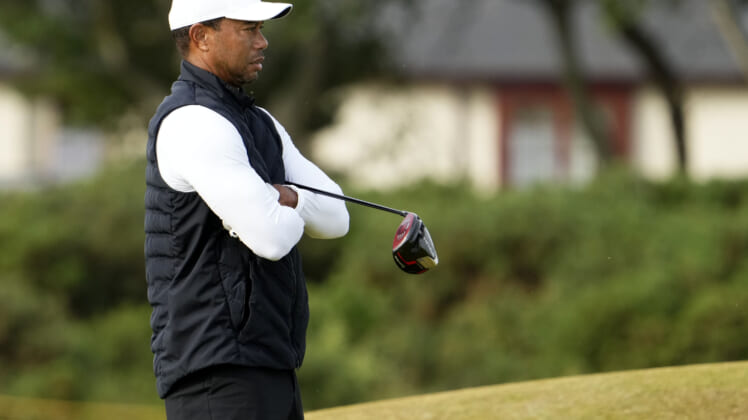 LIV Golf made a historic offer to Tiger Woods to try and lure away one of the greatest golfers ever away from the PGA Tour. Not only is Woods staying loyal to the PGA, he is going after LIV Golf and the players who chose to leave for money.

Speaking to reporters during a press conference at the 2022 British Open, the 46-year-old was asked about what he thought of young players who withdrew from the PGA Tour to compete in the Saudi-backed tournaments.

With all eyes on him and everyone waiting to see whether the greatest golfer of his generation would speak out against LIV like Rory Mcllroy or take a more diplomatic approach, Woods didn’t hold back.

An all-time great with 15 major championships and 82 PGA Tour victories, Woods went beyond a simple criticism of the decisions made by some of his peers. He went in-depth, questioning the motives of those who left for LIV Golf and raising points of concern for their future.

Among his critiques is the impact it could have on the competitive nature of golf. While he might agree the PGA can do more to reward its competitors, he seems to take issue with LIV rewarding everyone who participates with a massive payout. In his view of the LIV payout structure, there is a significantly reduced incentive to compete and fight for wins.

He focused a lot on young golfers who made the decision to jump from the amateur ranks into LIV Golf. It means many of them missed out on major tournaments that generate huge crowds and massive TV ratings when the best golfers are competing.

One point he raises is what some of his peers could lose out on. If LIV Golf doesn’t receive recognition for points in the world rankings and eligibility rules for major championships are changed, those who lef the PGA Tour will lose out on significantly more opportunities than they anticipated.

“I just don’t see how that move is a positive in the long-term for a lot of these players, especially if the LIV organization doesn’t get world-ranking points and the major championships change their criteria for entering the events.”

While an argument can be made that it was easier for Woods to stick with the PGA given he is a billionaire, he also turned down significant money from LIV Golf. Much like Mcllroy, tens of millions of dollars were on the table and it was rejected with criticism then aimed directly at the Saudi-backed league.

The PGA Tour certainly has plenty of issues it must address, officials will be pleased that the biggest face of the support is backing them and seemingly turning up the heat on those who left the PGA Tour behind.