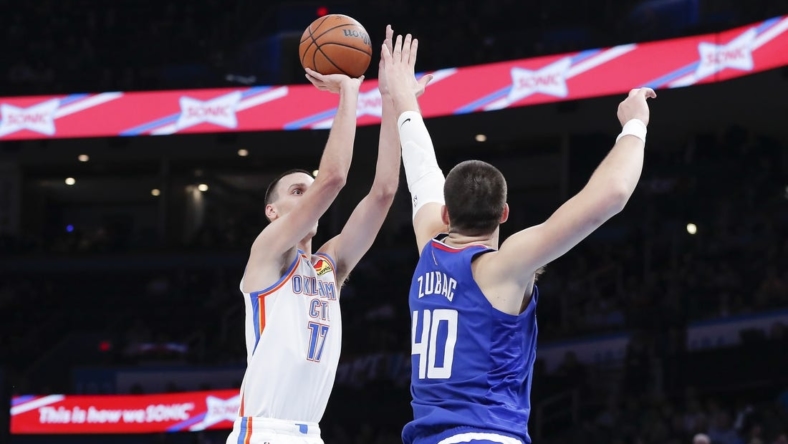 Shai Gilgeous-Alexander scored 24 points to lead the Oklahoma City Thunder to a 118-110 win over the visiting Los Angeles Clippers on Thursday.

The Thunder swept the two-game set against the Clippers, clinching at least a split of the season series for the first time since 2018-19. Host Oklahoma City downed Los Angeles 108-94 on Tuesday.

Oklahoma City hit a season-high 17 3-pointers, shooting 44.7 percent from beyond the arc.

The Clippers cut the deficit to one with a little more than five minutes remaining before Pokusevski’s step-back 3-pointer followed by Gilgeous-Alexander’s steal and layup a few moments later helped the Thunder grab control for good.

Paul George, who missed the Clippers’ Tuesday loss in Oklahoma City due to illness, returned but struggled, shooting 4 of 12 from the floor and missing all four of his 3-point attempts. He finished with 10 points.

The Thunder got off to a quick start, jumping ahead 30-12 just more than nine minutes into the game while taking advantage of nine Clippers turnovers in the opening quarter.

Two nights after going just 4 of 30 from behind the 3-point arc, the Thunder hit 6 of 10 3-poin tries in the first quarter.

The lead steadily dissipated, down to nine by late in the first quarter, and then Los Angeles battled back to take its first lead of the game with just more than two minutes to play in the first half. Reggie Jackson’s dunk put the Clippers on top 52-51.

Gilgeous-Alexander picked up his fourth foul in the final minute of the half and started the second half on the bench.

The Thunder didn’t attempt a free throw until nearly two minutes into the fourth quarter.