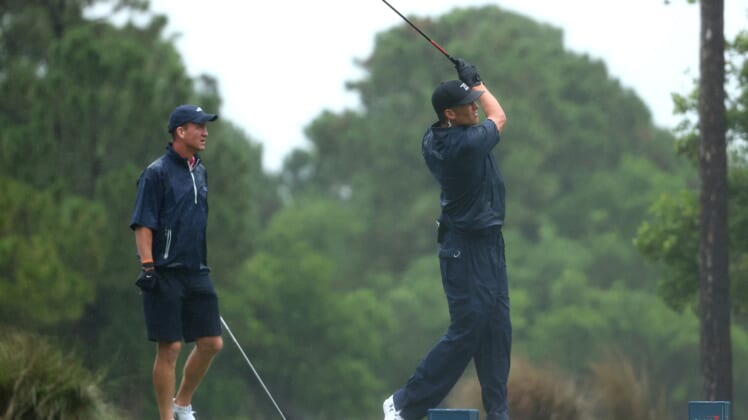 May 24, 2020; Hobe Sound, FL, USA; NFL player Tom Brady of the Tampa Bay Buccaneers plays his shot from the 14th tee as former NFL player Peyton Manning looks on during The Match: Champions for Charity golf round at the Medalist Golf Club. Mandatory Credit: Handout Photo by Getty Images for The Match via USA TODAY Sports

After months without sports, the return of two iconic rivalries gave fans everything they hoped for and more on Sunday. “The Match” between Peyton Manning and Tiger Woods against Tom Brady and Phil Mickelson proved to be a smashing hit for charity and television ratings.

Turner Sports announced on Monday afternoon that the telecast of Sunday’s charity golf tournament drew an average of 5.8 million viewers. The peak for Capital One’s “The Match” came in the closing rounds when 6.3 million people watched Woods and Manning close out their rivals for the win.

The charity tournament was held to help raise money for COVID-19 relief efforts and to provide sports fans with an escape during a difficult time. Between some incredible shots, hilarious trolling and a classic finish, “The Match” exceeded the grandest of expectations for those watching and playing.

Best of all, it raised $20 million that will immediately go towards COVID-19 relief and providing for those who are struggling most during this pandemic. Fans are already excited for this to happen again in the future and we can only hope it becomes a yearly tradition.