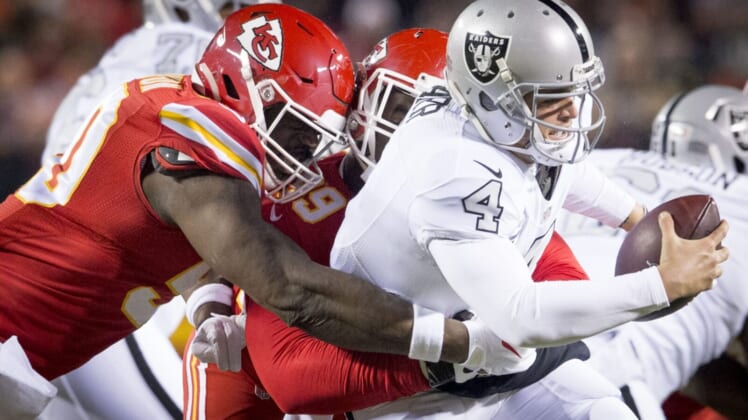 With pretty much the entire United States on lockdown at home, we decided to use the power of social media to ask Raider Nation to tell us about their own favorite Raiders memories.

With the legend that is the Autumn Wind and the Raiders franchise, historic and memorable moments go hand-in-hand with being a fan of the Silver and Black and a resident of Raider Nation.

With so multiple generations of fans, and a deep and passionate love for their team, hearing the personal story of Raiders fans and the moments etched in their minds is always a great exercise.

So as even the rough and tumble fans of the Raiders practice social distancing and help stop the spread of the current malaise, we decided to take to our social media handles to ask Raider Nation to share their favorite personal Raiders memory. Whether it was a game they watched on television, one they saw in Oakland or Los Angeles, or at a road game over the years, we wanted to hear personal stories.

The responses were overwhelming and too numerous to share all of them, but they stretched each and every decade of the Raiders and perhaps offered a glimmer of hope special moments like these were just around the corner yet again.

While there were plenty of memories of the Raiders winning their three Super Bowls, there were also very personal memories of regular-season games too. A father and son day out to cheer on their Raiders, or even memories of performances of opponents, they all included friends, family, and great football performances.

Here’s a sampling of the numerous examples we received.

“It was the now infamous Brett Favre game where he broke a few single-game passing records the day after his father passed away. Never in my 30+ years as a Raiders fan have I ever seen Raider Nation give a standing ovation to the opponent as they were absolutely shredding our defense. You could feel the emotion Favre was playing with and it softened up even the toughest Raiders fan. People could sense what he was going through was bigger than the game and his performance was just ridiculous.” – Arthur, Hollister, CA

This Raiders fan drove 10 hours to see the team in Indianapolis and was even in a photo of the event:

Raider Nation resident Ron not only got to see his team win but got a bonus seeing one of his favorite bands in the parking lot before the game:

It has to be tough being a Raiders fan in New York City but there are plenty of them including Vlasi with this special trip to see the Silver and Black:

“I’m a long time Raiders fan born and raised in NYC. One of the items on my buckets list was to watch my favorite team play on football’s holy land of football – the Oakland Coliseum. For my birthday, my wife and I attended the Raiders/Chiefs game on a Thursday night (2017) where the Raiders refused to lose. The clock had stopped and the Raiders kept running plays. After the win my wife turned to me and said, “It kinda seems like they won that one for you.”  A memory I will cherish for the rest of my life. RAAIIIIIIIDERS!!!! – Vlasi, NYC

In this fan’s case, breaking the rules paid off. Of course, it’s the Raiders way:

Harry remembers one of the most memorable Raiders wins in San Diego on a play known as the Holy Roller:

One Bo Jackson run on Monday Night Football was all this future Raiders fan needed to be RN4L:

One of the more numerous memories we heard from fans was “The Run” – Marcus Allen’s big play in Super Bowl XXII including for our reader Charles:

Andrea Villapiano, daughter of Raiders legend and Honorary Mayor of Las Vegas Phil Villapiano, chose the moment an old nemesis joined her Dad in the Black Hole in Oakland:

There were so many great memories our readers/listeners shared, we’ll have to do this again.

We’ll talk about some of your moments on this week’s CBS Sports Radio 1140 show from 8-10AM PT. Our guests this week include Raiders WR Hunter Renfrow, OverTheCap.com’s Jason Fitzgerald, our Sr. NFL Columnist Moe Moton, Tommy White with Allegiant Stadium update, and Raiders bar GM John Vizcarra of the Stage Door Casino on how the community is supporting his business during the COVID-19 crisis.

You can stream the show live on the FREE Radio.com app or via video on our YouTube channel.