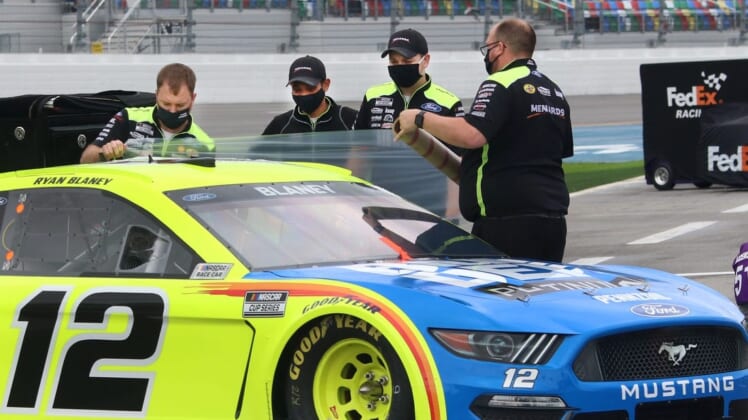 Ryan Blaney and Team Penske agreed to a new contract that extends “well into the future,” the team announced on Wednesday.

Blaney, who plans to remain in the No. 12 Ford on the Penske NASCAR Cup Series roster, joined the team in 2012 and signed his last deal in 2020.

“It just really means a lot that they’ve believed in me for 10 years and looking forward to continue that hopefully for a really, really long time,” Blaney said. “So they’ve been a family of mine, and I owe them a lot, that’s for sure.”

If the Cup Series season ended this week, Blaney would be the last driver in the playoffs. It would be his sixth consecutive postseason bid. Blaney has a 26-point lead over the next-closest driver in the standings, Martin Truex Jr., with two regular-season races to go.

The son of former Cup Series driver Dave Blaney, Ryan Blaney broke into racing on the Trucks Series. In a long line of memories and thank yous on Wednesday, he said it’s still the teammates around him that make him want to wear Penske with pride.

“They’ve been amazing to me, and I’m almost sometimes just nervous to ask them for stuff because they already do so much,” said Blaney, 28. “They’re always talking like, ‘You could ask for anything you want. If you need something changed or need something at all just ask us,’ but that always just makes me nervous because they’ve done so much for me, I’ve always kind of been sometimes quiet on that deal.

“But the people make you feel at home and make you feel welcome, and to know that they look up to you so much to perform well for them, it gives me extra motivation to want to do well for those guys and girls who are working at the race shop and maybe don’t even get a chance to go to the track. People that have never been to the track, who are engineers that are solely based at the shop, they even make you feel like home as well and you try to give it back to them. So I mean, that’s been the biggest thing to me is they’ve treated me great. And I couldn’t picture myself being anywhere else where they would treat me as good as the Penske and Wood Brothers folks have over the years.”