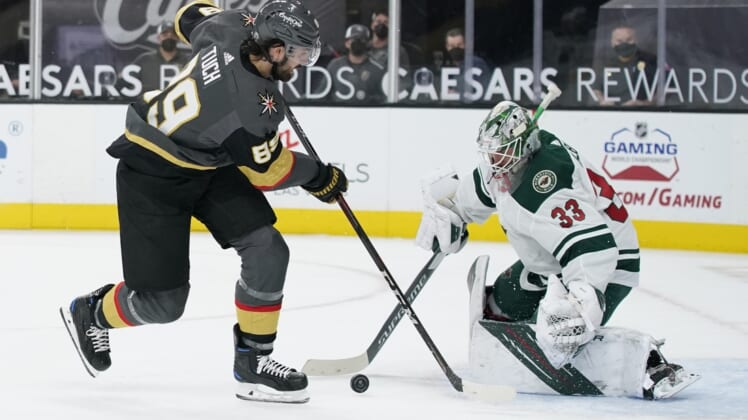 Cam Talbot made 35 saves and stopped all three shots in the shootout and Kevin Fiala scored the shootout winner as the Minnesota Wild defeated the Vegas Golden Knights 3-2 on Thursday night in Las Vegas.

Fiala beat Robin Lehner in the second round of the shootout with a shot that hit the post and then caromed into the net off the back of Lehner’s leg for the winning score. Alex Tuch had a chance to tie it in the third round for Vegas but Talbot turned away his backhand try with a blocker save.

Kirill Kaprizov had a goal and an assist and Jared Spurgeon also scored for Minnesota, which snapped a five-game road losing streak and improved to 9-2-2 all-time against the Golden Knights.

William Karlsson and Brayden McNabb scored goals for Vegas, which moved into a tie with Colorado for first place in the West Division. Lehner finished with 35 saves.

Vegas, which had allowed a goal in the first two minutes in three consecutive games, jumped out to a 1-0 lead at the 3:29 mark of the first period when Karlsson grabbed a loose puck near the right faceoff dot and fired an off-balance shot over Talbot’s right shoulder for his 10th goal of the season.

Minnesota rebounded to tie it in the middle of the period when Kaprizov redirected Jordan Greenway’s crossing pass from below the left circle inside the right post for his 13th goal of the season, tops among all rookies in the NHL.

McNabb, who clanged a shot off the crossbar in the first period, gave Vegas a 2-1 lead at the 1:39 mark of the third period with his first goal in 67 games dating back to Nov. 21, 2019 against San Jose. The score came on a wrist shot from the right point that found its way through traffic and a Tuch screen.

Minnesota tied it four minutes late on Spurgeon’s fourth goal of the season during a 4-on-3 power play, one-timing Fiala’s pass from the left circle into the far corner.

Vegas got a 4-on-3 power play early in overtime after Joel Eriksson Ek crashed into Lehner at the end of a rush and was called for goaltender interference. But Talbot turned away all three Vegas shots, including a close-in one-timer by Max Pacioretty.