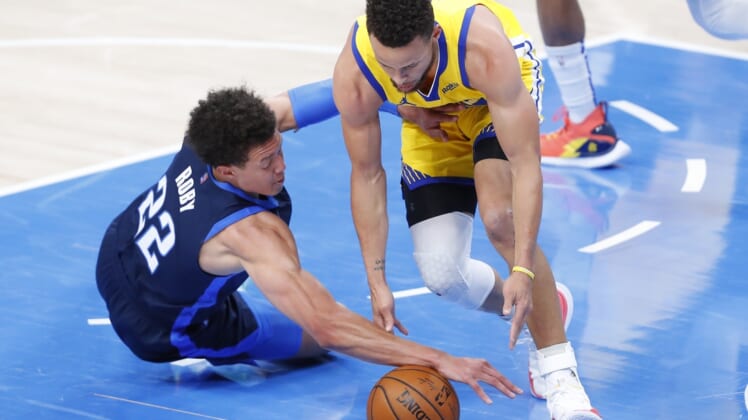 Stephen Curry scored 42 points in just three quarters of action, leading the Golden State Warriors to a 147-109 road win over the Oklahoma City Thunder on Wednesday.

The Warriors, who never trailed, led by as many as 27 in the first half, separating themselves in the second quarter.

Golden State’s offense went into overdrive to start the second half, thanks to Curry.

Curry hit all eight of his shots from the field — including six 3-pointers — to score 25 third-quarter points as the Warriors put up 50 points in the quarter.

Golden State was 17 of 23 from the floor in the quarter, their highest-scoring period since January 2019.

Draymond Green had his fourth triple-double of the season and the 28th of his career, with 12 points, 10 rebounds and 16 assists. Green had seven assists in the third. Green, Curry and the other Warriors starters sat out the fourth quarter.

The Warriors hit a season-high 24 3-pointers while equaling their highest point total of the campaign.

Curry, who finished 14 of 20 from the field and 11 of 16 from beyond the arc in 29 minutes, is averaging nearly 39 points per game since returning from a tailbone injury in late March.

The Thunder have lost eight consecutive games and 11 of their past 12. During the eight-game skid, Oklahoma City has lost by an average 27.4 points per game.

Oklahoma City scored 70 points in the paint but shot just 25.9 percent (7 of 27) from long distance.

A night after scoring a career-high 42 points in a loss at Utah, the Thunder’s Luguentz Dort sat out due to left shoulder soreness. Oklahoma City was also without Aleksej Pokusevski for the second consecutive game because of right arm soreness.