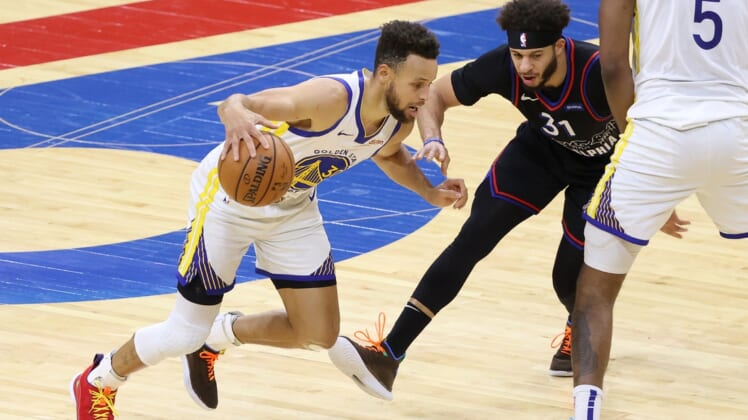 Stephen Curry scored 20 of his 49 points in the fourth quarter to propel the visiting Golden State Warriors to a 107-96 victory over the Philadelphia 76ers on Monday night.

Curry drained 10 3-pointers on his way to recording his NBA-best eighth 40-point performance of the season. It also marked Curry’s 11th straight game of at least 30 points.

The Western Conference Player of the Week initially received a spirited challenge from a familiar foe: his younger brother. Philadelphia’s Seth Curry scored all 15 of his points in the first half, while teammate Joel Embiid finished with 28 points and 13 rebounds.

For the Warriors, Andrew Wiggins collected 16 points and 10 rebounds, and Kevon Looney notched 15 rebounds. Golden State has have won five of its last six games.

Matisse Thybulle scored 13 points off the bench and Danny Green made four 3-pointers for the 76ers, who saw their four-game winning streak end.

Embiid made a pair of free throws to give Philadelphia a 92-91 lead before Stephen Curry made two of his own to ignite a 10-0 run for Golden State. He sandwiched 3-pointers around Wiggins’ basket and answered Shake Milton’s 3-pointer with another one. Curry tacked on three more free throws to cap his scoring.

The 76ers played without Tobias Harris (right-knee soreness) and Ben Simmons (illness), although George Hill scored two points in 18 minutes in his debut. Hill, who returned from thumb surgery, was acquired from the Oklahoma City Thunder last month in a three-team trade with the New York Knicks.

Philadelphia scored the first 12 points of the game before Golden State responded with a 24-12 surge to end the quarter in a tie. Stephen Curry highlighted the Warriors’ surge with three 3-pointers, including one at the buzzer.

Golden State pushed its advantage to six midway into the second quarter before Embiid began to heat up. Embiid scored 10 points during the final five minutes of the quarter, including a mid-range jumper with 7.2 seconds left to tie the game at 55 at halftime.