Stephen Curry scores 43 as Warriors down Celtics, even Finals 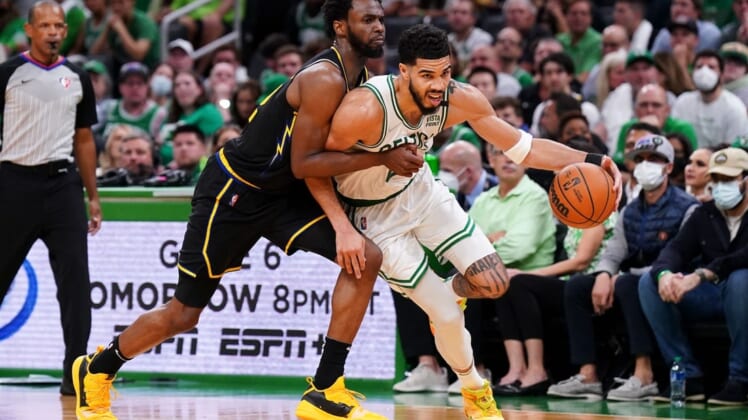 Stephen Curry recorded 43 points and 10 rebounds and the Golden State Warriors evened the NBA Finals at two games apiece with a 107-97 victory over the host Boston Celtics in Game 4 on Friday night.

Curry made 14 of 26 field-goal attempts — including 7 of 14 from 3-point range — while moving with ease on the left foot he injured late in Game 3. His previous high in this year’s postseason was 34.

Game 5 in the best-of-seven series is Monday at San Francisco.

Golden State finished the game with a dominating 17-3 burst over the final five minutes.

Smart drained a 3-pointer to give Boston a 94-90 lead with 5:18 remaining, but the Warriors answered with 10 consecutive points. Wiggins scored on a putback, Thompson hit a 3-pointer and Curry sank a floater for a 97-94 edge with 3:49 to play.

Neither team scored for more than two minutes before Curry buried his seventh 3-pointer to make it a six-point margin with 1:42 to go.

Al Horford ended the Celtics’ drought by hitting a 3-pointer with 1:32 left. However, Golden State’s Kevon Looney made a layup with 1:04 to play and Curry sank 5 of 6 free throws down the stretch to seal it.

The Warriors scored the first five points of the third quarter to tie the score at 54, but Boston responded with a 9-2 push to move ahead by seven.

Curry scored 14 points in the quarter and made four 3-pointers, with three of the treys coming in the final 4:19. The last one gave Golden State a 79-78 edge with 58.5 seconds left in the stanza.

Tatum had 16 points as the Celtics led 54-49 at halftime. Curry had 19 before the break for the Warriors.