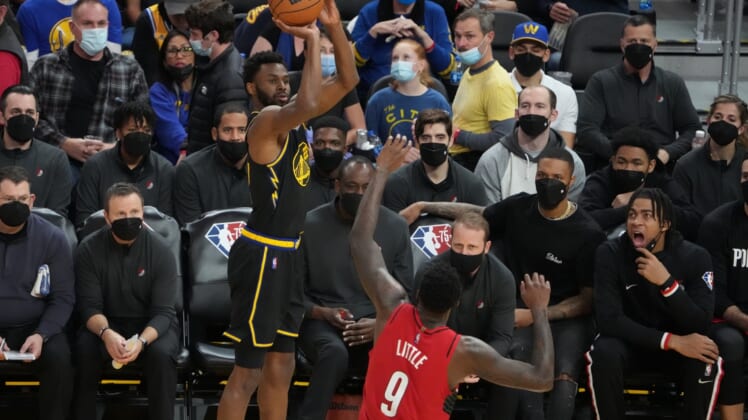 Stephen Curry moved within nine of Ray Allen’s record with six 3-pointers en route to a team-high 22 points Wednesday night to help the Golden State Warriors close out a four-game homestand with a 104-94 victory over the short-handed Portland Trail Blazers in San Francisco.

With the home crowd hoping to see him break Allen’s all-time career mark of 2,973, Curry missed his first four 3-pointers and never challenged the 15 he needed to tie the mark.

Now sitting at 2,964, Curry will get his next opportunity at breaking the mark in a nationally televised game Saturday night in Philadelphia against the 76ers as the Warriors tip off a five-game trip.

Facing a road-challenged team missing Damian Lillard (lower abdominal tendinopathy) and C.J. McCollum (collapsed right lung), the Warriors struggled to seize control of the game. They led 76-66 after three quarters, then never by more than 16 in the final period.

Curry shot 6-for-17 on 3-pointers on a night when the Warriors hoisted up a total of 46 but made just 14. Otto Porter Jr. was the most effective of the hosts, going 4-for-6 to account for all but three of his 15 points off the bench.

Jordan Poole added 20 points, Andrew Wiggins 14 and Kevon Looney 11 for the Warriors, who improved to 14-2 at home. Each of their last 13 home wins has come by at least 10 points.

Draymond Green contributed a team-high 10 rebounds and game-high eight assists to the win, which was the Warriors’ second at home over the Trail Blazers in a 12-game stretch that has seen Golden State go 10-2.

Norman Powell had a game-high 26 points for the Trail Blazers, who dropped their fourth straight, all by 10 or more points.

Powell made just one of his seven 3-point tries as Portland, in losing for the 11th time in 12 road games this season, also struggled from beyond the arc (8-for-30).

The Trail Blazers outshot the Warriors overall 40.7 percent to 39.8 percent.