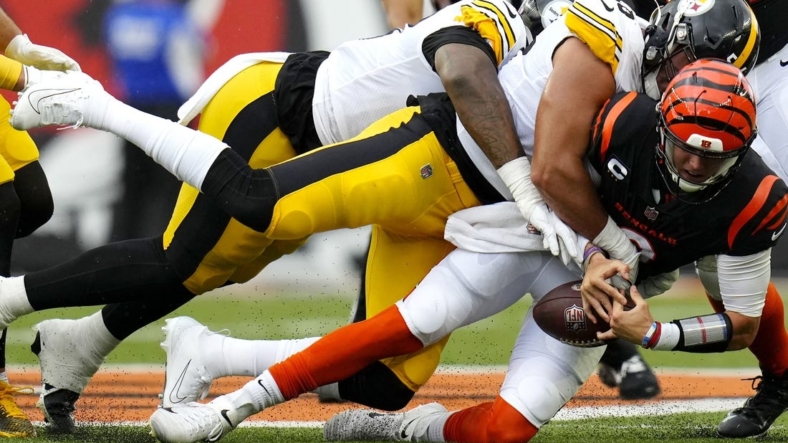 Chris Boswell booted a 53-yard field goal as time expired in overtime to give the visiting Pittsburgh Steelers a 23-20 victory over the Cincinnati Bengals on Sunday in the season opener for both teams.

Mitch Trubisky completed passes of 26 and 10 yards to Pat Freiermuth on the decisive drive to set up Boswell’s kick. Trubisky passed for 194 yards and one touchdown in his first start for the Steelers.

Minkah Fitzpatrick returned an interception for a touchdown early in the game and blocked an extra point with two seconds left in regulation for Pittsburgh. The Steelers forced five turnovers and recorded seven sacks.

Pittsburgh star T.J. Watt had one interception, one sack and three tackles for loss but left late in regulation with a left pectoral injury.

Cincinnati’s Joe Burrow was picked off a career-worst four times and also lost a fumble while accounting for all five of his club’s turnovers. Burrow passed for 338 yards and two touchdowns for the defending AFC Champions.

Burrow tossed a 4-yard scoring pass to Ja’Marr Chase to tie the score in the final seconds. Evan McPherson’s extra point was blocked by Fitzpatrick to send the game into overtime.

McPherson badly missed a 29-yard field goal to the left with 3:33 remaining in overtime. Boswell clanked a 55-yarder off the left upright with 2:22 to go in overtime before later hitting the winning kick.

Alex Highsmith recorded a career-high three sacks for the Steelers, who also received interceptions from Cameron Sutton and Ahkello Witherspoon.

Najee Harris caught a touchdown pass but had just 23 yards on 10 rushes and left late in regulation with an apparent foot injury.

Tyler Boyd caught a scoring pass and Chase had 10 receptions for 129 yards for the Bengals. Joe Mixon had 145 yards from scrimmage (82 rushing, 63 receiving).

Cincinnati trimmed an 11-point halftime deficit to 17-14 when Burrow tossed a 2-yard scoring pass to Boyd with 4:41 left in the third and tacked on a two-point conversion throw to Mike Thomas.

The Steelers led 17-6 after a first half in which they forced Burrow into four turnovers.

Burrow was intercepted on the second offensive play by Fitzpatrick, who returned it 31 yards for a touchdown with 12:43 left in the first quarter. It is Fitzpatrick’s fourth career interception return for score.

Watt intercepted Burrow early in the second quarter, setting up Harris’ 1-yard scoring pass from Trubisky to make it 17-3 with 8:46 left in the half.