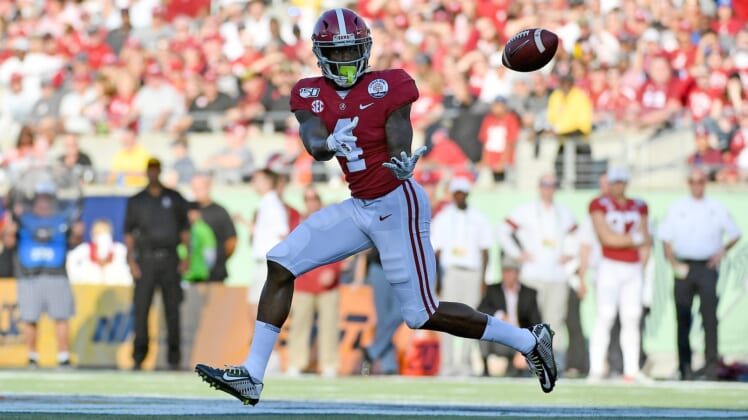 The new year kicked off in grand fashion on Wednesday with college football providing fans with four incredible games. If the New Year’s Day games are any indication of what’s to come, 2020 is going to be a year that we won’t ever forget.

It started with the Outback Bowl as No. 18 Minnesota made a statement early over No. 12 Auburn. If anyone thought the Golden Gophers’ offense couldn’t make plays against an SEC defense, receiver Tyler Johnson proved otherwise with a stunning performance.

Alabama used the Citrus Bowl to show it can still be a dominant team. Even with its offense missing several key players on Wednesday, two of its biggest stars stepped up and ripped through Michigan’s defense with ease.

Of course, the night ended emphatically with the Rose Bowl and Cotton Bowl. After Oregon and Wisconsin exchanged blows early, quarterback Justin Herbert did just enough to win in Pasadena and ended his collegiate career on top. Once that wrapped up, Georgia punished Baylor in the Sugar Bowl with the Bulldogs’ defense and passing game running the Bears out of New Orleans.

Here are the standout players from the exciting New Year’s Day bowl games.

After being left off All-American ballots and not being recognized as a Biletnikoff Award finalist, Tyler Johnson wanted to send a message in the Outback Bowl. Unfortunately for Auburn, his frustration from being snubbed was bad news for its secondary and hopes for a win.

The senior utterly humiliated Auburn’s secondary. He scorched the Tigers for a 73-yard touchdown, the game-deciding score, in the fourth quarter. Johnson also put his absurd skills in the red zone on display with a touchdown grab that might go down as one of the best in 2020. He ended his collegiate career with a remarkable 204-yard, two-score performance. We look forward to Johnson becoming an impact receiver in the NFL next season.

It took a few weeks for Harris to find his rhythm early in the year. Once he did, there’s no doubt he proved himself as one of the best running backs in the country. If the Outback Bowl is his last collegiate performance, he put on one heck of a closing act.

This wasn’t the kind of 100-yard game where one big play accounts for a majority of the numbers. Harris’ longest run went for 25 yards, capturing just how effective he ran the ball on nearly every carry. He finished with 136 rushing yards and two scores on 24 carries, closing out his junior season with 1,224 rushing yards, 304 receiving yards and 20 total touchdowns. If he declares for the 2020 NFL Draft, Harris will go down as one of its biggest steals years from now.

Jeudy didn’t need to play in this game. He will be a top-10 pick in the 2020 NFL Draft, potentially even a top-five selection. Yet, Alabama’s top receiver put his body and future earnings on the line to play with his teammates one more time. While we are grateful, Michigan wasn’t.

It didn’t take long for Jeudy to demonstrate his greatness. He turned Michigan’s secondary into dust with an 85-yard touchdown on Alabama’s first play. Big plays became the theme for Jeudy in the Citrus Bowl. He finished with 204 receiving yards on six receptions, averaging 34 yards per catch, showing everyone why he’ll be a star the moment he arrives in the NFL.

It wasn’t always pretty for Herbert. Oregon’s play-calling on offense often failed to take advantage of its dominant offensive line and Herbert’s arm. Yet, the senior quarterback found a way to deliver a game-winning performance in the Rose Bowl.

Surprisingly, the senior’s legs made the big difference. The Ducks called his number on two keepers near the end zone and he delivered both times with touchdown runs. When the Ducks needed a big play in the fourth quarter, Herbert kept it and then slipped passed Wisconsin’s entire defense for the 30-yard touchdown. After running through the Badgers for three touchdowns, Herbert put them away with his arm to seal a Rose Bowl victory. It was the perfect way for Herbert to end his career with the team he has loved since birth.

Georgia’s offense fell apart at the worst times this season. After coming into the Sugar Bowl on a cold streak, the Bulldogs’ aerial attack came alive on Wednesday and the freshman receiver played a pivotal role in the season-ending win.

Pickens simply overwhelmed Baylor’s cornerbacks. He went deep early for a 46-yard reception, an early sign that this passing game was in good shape. The freshman then helped the Bulldogs find the end zone, hauling in the perfect pass and sneaking into the end zone for a 27-yard score. Pickens racked up 11 receptions for 165 yards by halftime and finished with 175 receiving yards with Georgia running out the clock in the second half.

Considered a first-round talent before the season, Fromm damaged his NFL stock throughout much of the season with inconsistent accuracy and a series of horrendous throws regularly. We witnessed Fromm’s best performance of the year on Wednesday and it came with multiple backups starting on the offensive line and plenty of drops by his pass-catchers.

Whereas Fromm’s touch on deep passes disappeared during stretches in the regular season, he displayed pinpoint accuracy against Baylor. Frankly, the junior’s first touchdown of the night felt reminiscent of Aaron Rodgers’ best throws. Fromm could still decide to enter the 2020 NFL Draft, but he might benefit from returning for his senior season. If he performs like this consistently, he can become a top-10 draft pick and a future Pro Bowl quarterback at the next level.