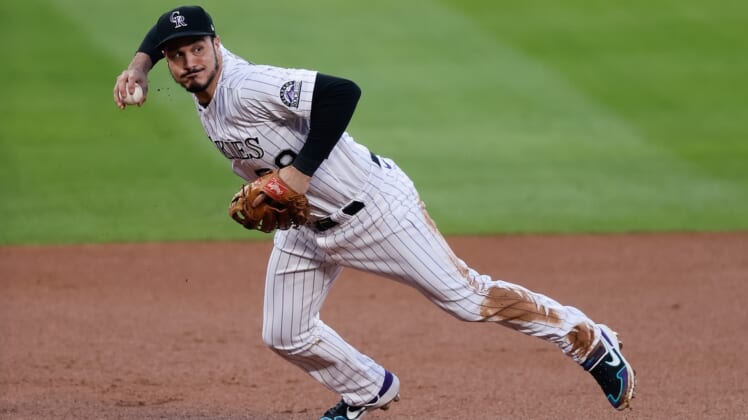 The St. Louis Cardinals completed their third base upgrade Monday, confirming the acquisition of Nolan Arenado from the Colorado Rockies.

The trade sent Arenado and cash to the Cardinals in exchange for left-hander Austin Gomber, right-handers Tony Locey and Jake Sommers and infielders Mateo Gil and Elehuris Montero.

The Cardinals announced that they reached an agreement with Arenado on a one-year contract extension carrying his deal through the 2027 season. He retained opt-out clauses that can be exercised after the 2022 and 2023 seasons.

The team did not divulge the cash going from the Rockies to St. Louis, but multiple media outlets reported that the Cardinals will get $50 million to pay part of the $199 million that Arenado is guaranteed through the 2026 season.

Cardinals president of baseball operations John Mozeliak said in a statement, “Many have heard me say that one of the great things about baseball is that you always have a chance to get better. Today we got better!

“A deal of this nature, acquiring a player of Nolan’s considerable talents, are the ones that can set you apart in many ways. It certainly shows the commitment of Mr. DeWitt and ownership to continue to give our great fans a team that aims to win — both now and in the future.”

Arenado, 29, is a five-time All-Star, an eight-time Gold Glove winner and a four-time Silver Slugger winner. He lobbied his way out of Colorado after criticizing the team’s direction under general manager Jeff Bridich and owner Dick Monfort.

Locey, 22, has never appeared higher than Class A. In three minor league seasons, the University of Georgia product has a 1-2 record with a 5.29 ERA in 12 games, all in relief.

Gil, 20, has reached high Class-A ball, and he has a .257 average with eight homers and 50 RBIs in 98 games over two minor league seasons.