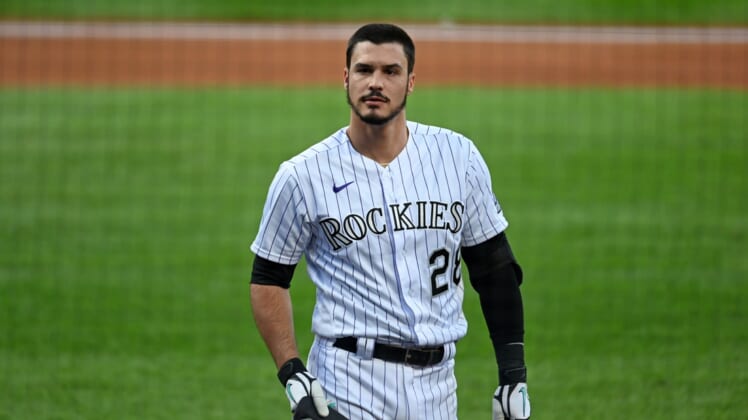 The St. Louis Cardinals acquired third baseman Nolan Arenado from the Colorado Rockies in exchange for cash in the range of $50 million as well as several players, multiple media outlets reported Friday night.

Arenado, a five-time All-Star and eight-time Gold Glove winner, reportedly will defer money, though how much is unclear. The 29-year-old veteran on the books for $35 million in 2021, as he signed a $260 million, eight-year contract with Colorado in February 2019. The pact includes an opt-out clause after the upcoming season.

Players who could be headed to the Rockies in the deal include left-handed pitcher Austin Gomber, first baseman Luken Baker, outfielder Jhon Torres and right-handers Jake Woodford and Angel Rondon, according to The Athletic.

Arenado has voiced his frustration with the Rockies’ lack of progress, specifically that of general manager Jeff Bridich and owner Dick Monfort, in building a contending team around him.

The Rockies finished 26-34 last year — 17 games behind the Los Angeles Dodgers in the National League West — after making wild-card playoff round in 2017 and the divisional round in 2018.

Matt Carpenter and Tommy Edman were the primary third basemen for the Cardinals last year, but Carpenter batted .186 and Edman hit .250. St. Louis third basemen combined for a .216 average with five homers and 33 RBIs in 58 games.