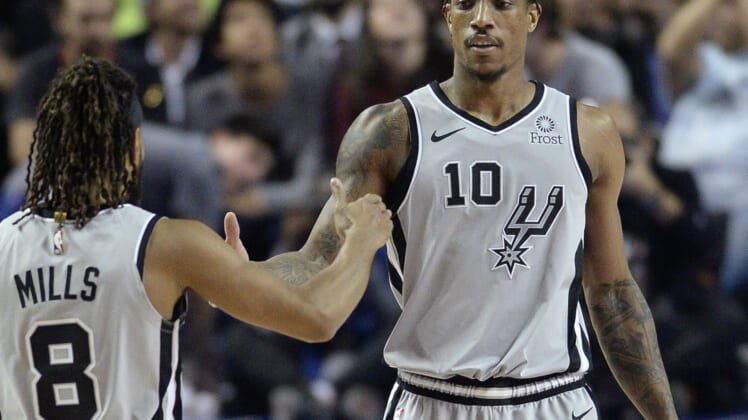 For the first time since Kirk Gibson was hitting big time October homers and Ronald Reagan was in the White House, the San Antonio Spurs are irrelevant on the broader NBA stage.

San Antonio heads into this week’s action with a 10-15 record and pretty much already out of the Western Conference Playoff race.

It’s led to us speculating that a rebuild could be in the cards in San Antonio. Now, according to ESPN’s Adrian Wojnarowski, that could happen as soon as February’s trade deadline.

“This rebuild is coming in San Antonio. Whether it’s this trade deadline or this summer,” the NBA insider said on a recent podcast. “There’s no getting around it. It’s going to be a hard road for them. They’re not setup to turn this around very quickly.”

Look for the Spurs to entertain offers for All-Stars DeMar DeRozan and LaMarcus Aldridge. Both have seemingly been on the trade block for a while now.

As Woj notes, this is a vastly different Spurs organization than we’ve seen for the better part of the past quarter century.

San Antonio last missed out on the playoffs back in 1996-97. Even then, that was all about the team tanking for Tim Duncan. It came on the heels of the Spurs earning seven consecutive playoff appearances.

This means Gregg Popovich and Co. have played meaningful spring basketball every season but one since 1988-89.

Things change. Rosters grow old. Trades are made that don’t set teams up well moving forward. The backdrop here is a Western Conference that’s been dominated by both Los Angeles-based teams through the first quarter of the season.

This is all going to lead to San Antonio starting anew with a rebuild either in February or when the summer comes calling.