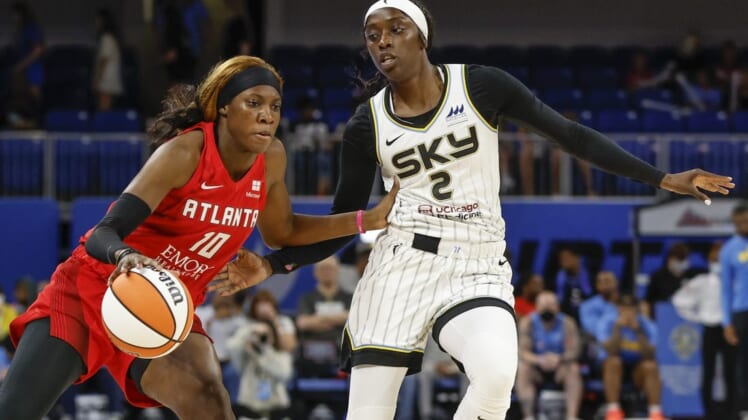 Phoenix Mercury guard Skylar Diggins-Smith was named to her sixth WNBA All-Star Game and Atlanta Dream rookie guard Rhyne Howard was chosen for her first when the league announced its 12 All-Star reserves on Tuesday.

Kahleah Copper and Courtney Vandersloot of the Chicago Sky, Ariel Atkins of the Washington Mystics, Jewell Loyd of the Seattle Storm and Arike Ogunbowale of the Dallas Wings joined Diggins-Smith and Howard at guard.

The league’s 12 head coaches voted for the reserves after a combination of fans, active players and media voted on the starters. The game is set for July 10 in Chicago.

Diggins-Smith ranks fifth in the league in scoring (18.8 points per game) and ninth in assists (5.1 per game) despite Phoenix’s 8-12 record.

Howard, the No. 1 overall pick in April’s draft, is the only first-time All-Star among the group. The Kentucky product leads all rookies with 16.2 points and 1.6 steals per game and has made 47 3-pointers, good for fourth overall in the WNBA.

The game’s starters were announced last week. A’ja Wilson of the Las Vegas Aces will co-captain a team with Sue Bird of the Seattle Storm, and Seattle’s Breanna Stewart will co-captain the other team with Sylvia Fowles of the Minnesota Lynx. Bird and Fowles each have said that they will retire after this season.

The co-captains will conduct a draft this Saturday.