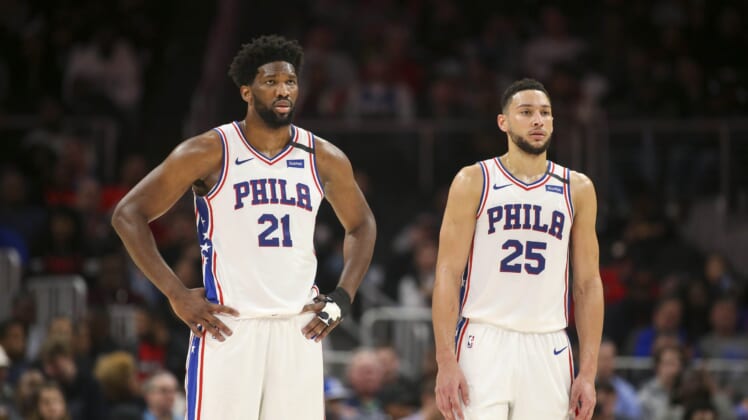 Less than a week after being hired as the Philadelphia 76ers’ next head coach, Doc Rivers held his introductory press conference on Monday. There’s certainly a lot of takeaways from said press conference.

Immediately following another premature playoff exit, the Sixers fired then-coach Brett Brown after seven seasons back in August. At that point, there were questions about what general manager Elton Brand might do with the roster.

Could the Sixers potentially break up the core of All-Stars Ben Simmons and Joel Embiid? Rivers touched on that during Monday’s Zoom presser. His take should not be considered too surprising.

“Embiid and Simmons have won 65% of the games that they’ve played in, right? It clearly works when they play together,” Rivers told reporters.

Rivers went on to suggest that he couldn’t care less how the points are scored while noting that his teams have been good on offense historically. He isn’t necessarily wrong in this regard. During his seven-year run with the Los Angeles Clippers, Rivers led some pretty potent scoring offenses.

A top-10 scoring offense in each of his seven seasons with the Clippers. That’s not too shabby. However, the situation is vastly different in Philadelphia. A lot was made this past season about the Sixers’ struggles shooting from the perimeter. In fact, the above-mentioned Brett Brown called out Simmons on a near never-ending loop.

As for rumors suggesting a potential trade of Simmons or Embiid, those were quieted following the team’s first-round playoff exit against the Boston Celtics. In no way does that mean there’s a lack of truth surrounding them. Rivers himself will have a say regarding this.

“That was one of the things that was so exciting about this job, to have this opportunity to work with Elton,” Rivers said. “Not just on the court. I actually think it actually starts off the court. We have to get that part right. That’s exciting. I think Elton and I will have a chance to form an amazing partnership together, and we’ll grow from there.”

Rivers does have experience making player personnel decisions dating back to his time with the Clippers. Whether this has a role in the Embiid-Simmons dynamic remains to be seen.

What we do know is that the Sixers have a lot of work to do from a player personnel standpoint this fall and winter. The signing of Al Horford back in the summer of 2019 has this organization behind the proverbial eight-ball when it comes to the salary cap. Tobias Harris playing under a max contract adds a new layer to this.

The hope in Philadelphia is that these two figures will work well together. That will be the biggest key heading into the 2020-21 campaign.