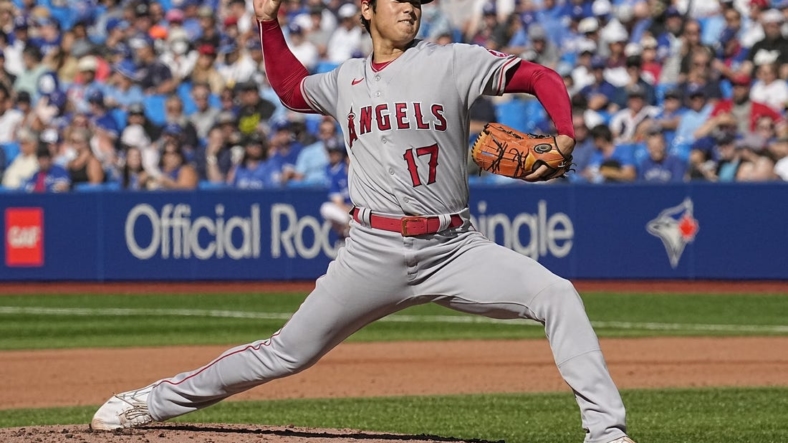 The Angels have not given up a run while winning the first two games of the three-game series, outscoring the Blue Jays by a combined 14-0.

Ohtani (11-8) allowed two hits and one walk on the mound and also walked twice at the plate.

Angels right fielder Ryan Aguilar led off the fifth with a double to right for his first major-league hit, but was out trying to extend it to a triple.

David Fletcher led off the sixth with a single. Mike Trout walked and was forced at second on Ohtani’s grounder to the pitcher, with Ohtani’s speed preventing a double play. Luis Rengifo hit an RBI single to left.

Ohtani set the top of the Blue Jays’ lineup down in order in the bottom of the sixth.

Manoah struck the first two batters of the seventh before ending the inning with a groundout.

Ohtani retired 11 in a row before Cavan Biggio reached first base on an error by shortstop Velazquez with one out in the bottom of the seventh. Ohtani retired the next two batters on a strikeout and a flyout.

Yimi Garcia replaced Manoah in the eighth. Fletcher led off with an infield single to shortstop, his third hit of the game, while Trout struck out and Ohtani walked. The runners advanced to second and third when Rengifo grounded out to Garcia.. Mike Ford walked to load the bases but Jo Adell flied out to end the threat.

Anthony Bass allowed Velazquez’s eighth home run of the season with two out in the ninth.

Herget was perfect in the bottom of the ninth to earn his third save.