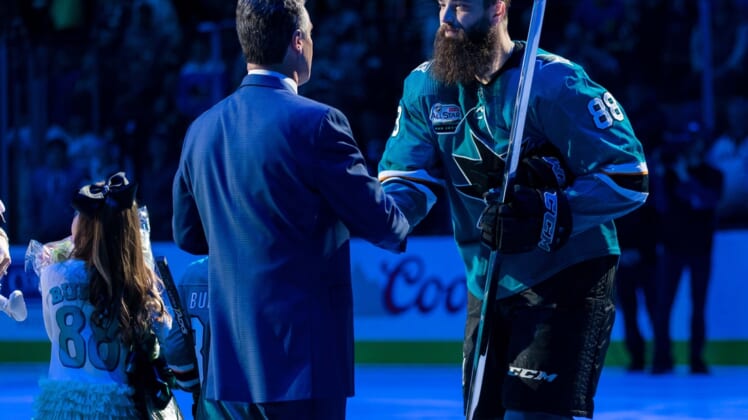 San Jose Sharks general manager Doug Wilson announced Thursday he is stepping down after 19 seasons to focus on his health.

Wilson, 64, who has held the role since 2003, has been on leave from the team since November.

“These past 19 years serving as general manager of the San Jose Sharks have been a privilege and one of the most fulfilling and enjoyable periods of my life,” he said in a news release. “I have been incredibly fortunate to work for and with some of the most talented and passionate people in the game of hockey.

“I want to thank Hasso Plattner, along with our previous ownership groups, for the incredible opportunity and the trust they placed in myself and our staff. I want to also thank all of the coaches, players, scouts, trainers and members of the hockey department that I have worked with over these many years for their dedication and commitment to our organization. I want to thank the tremendous fans of the San Jose Sharks franchise. Your enthusiasm and support of this team is unmatched, and I will cherish the shared memories that we have built together over nearly two decades.”

During Wilson’s tenure, only the Pittsburgh Penguins (768) and Boston Bruins (762) won more games than the Sharks (760).

San Jose qualified for the Stanley Cup Playoffs 14 times, including 10 straight appearances from 2004-14.

The Sharks won the Presidents’ Trophy in 2009 and reached the Stanley Cup Final in 2016, losing to Pittsburgh in six games.

A member of the Hockey Hall of Fame, Wilson also thanked everyone who has reached out to him during his leave of absence.

“While I have made great progress over the last several months, I feel it is in the best interest of the organization and myself to step down from my current duties and focus on my health and full recovery,” he said. “I look forward to continuing my career in the NHL in the future.”

With 13 games remaining, the Sharks (29-31-9, 67 points) entered Thursday 16 points behind the Dallas Stars for the final wild-card playoff spot in the Western Conference.