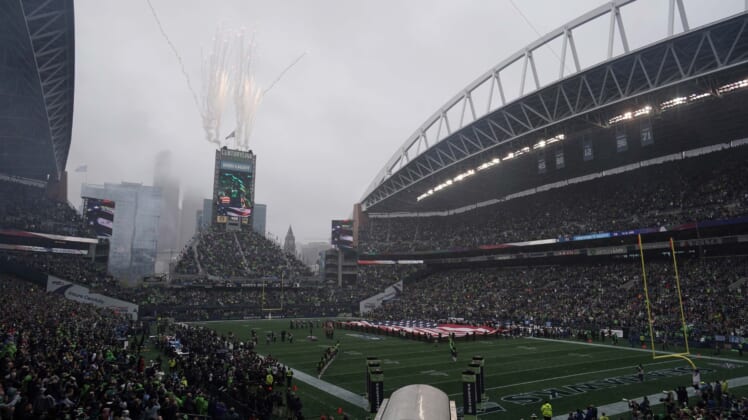 Oct 20, 2019; Seattle, WA, USA; General overall view of CenturyLink Field and the downtown Seattle skyline during the playing of the national anthem before the NFL game between the Baltimore Ravens and the Seattle Seahawks. Mandatory Credit: Kirby Lee-USA TODAY Sports

It’s among the unintended consequences of the COVID-19 pandemic within the sports world. Games being played without fans in attendance.

It’s also created some surreal scenes at Walt Disney World, where the NBA has resumed its season. Throughout the United States, we’re also seeing baseball games being played without fans in attendance. As weird as this might be for the viewers, it’s equally as eerie for players.

We can expect this to continue into the 2020 NFL regular season starting in a few weeks.

CenturyLink has represented one of the best home-field advantage in the NFL. Seahawks football is synonymous with the 12th Man creating a hostile environment for road teams.

At least for the first three games of the 2020 season, that won’t be the case in the Pacific Northwest.

These represent three high-profile early-season games around the NFL. Two of them, against the Patriots and Vikings, are slated to air nationally on prime time.

Washington was among the first epicenters of the COVID-19 pandemic in the United States this past spring. While the state has done well to flatten the proverbial curve, there’s still some concern over it making a rebound this fall.

NFL teams deciding whether to host fans for the 2020 season

There’s no league-wide policy in place right now. The NFL is leaving it up to the teams as well as local health officials and government leaders to make a final determination.

For example, the Kansas City Chiefs are expecting to have Arrowhead Stadium at 20-plus percent capacity this season. Meanwhile, the Las Vegas Raiders are among the teams that have already announced they will not host fans throughout the season. Other teams, like the Seahawks, have only announced plans for the first few games.

We’re likely to hear a lot more from teams with the 2020 regular season slated to kick off in about three weeks.