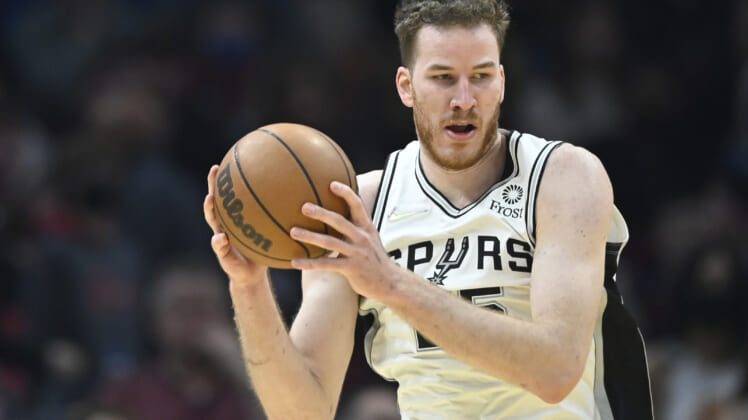 One thing the San Antonio Spurs made clear with the Dejounte Murray trade, it’s that they’re not worried about competing this season. Their next step? It could be to tear it all down and rebuild, which likely means parting with anyone who’s not in their first or second year, including Jakob Poeltl.

With the 2023 NBA Draft class expected to be a strong group, the Spurs may be angling to better position themselves to land a player like Victor Wembanyama. But just what else do the Spurs have to trade?

There isn’t anyone left on the roster who can currently command a Dejounte Murray-like trade package, but that’s ok. Spurs general manager Brian Wright can still trade other pieces as the team looks to retool for the future.

According to Eric Pincus of Bleacher Report, teams around the NBA consider current veterans on the Spurs to be available. This includes the likes of Jakob Poeltl, Doug McDermott and Josh Richardson.

Poeltl in particular could be of value to a team looking for a starting center. Maybe even the Phoenix Suns, depending on what happens with Deandre Ayton. Poeltl’s currently in the final year of his contract, set to make $9.3 million in 2022. He’s coming off a season averaging 13.5 PPG and 9.3 RPG, adding 1.7 BPG. And he’s still just 26.

Richardson’s a proven 3-and-D wing and would be a valuable addition to any playoff rotation. The same goes for McDermott, who’s a career 40.9% shooter from three-point range.

Players who aren’t likely to be traded include their three first-round selections from the 2022 draft, in addition to last year’s 12th overall pick Josh Primo. It’s possible Devin Vassell, Keldon Johnson and Tre Jones are in that group too, but like with anything, even they are probably available for the right price.

If the Spurs are eyeing one of the top prospects in the 2023 NBA Draft, they might want a few more assets as they currently have their own first-round pick, but no others in the opening round. Still, they project to have one of the worst teams in basketball next year, so keeping the vets around would be doing them a disservice. It makes more sense for everyone to move on.