The Notre Dame Fighting Irish have a new starting quarterback. One of college football’s top quarterbacks in the transfer portal, Wake Forest’s Sam Hartman is taking his talent to South Bend in 2023 for his final season of eligibility.

Hartman, who has spent the previous five seasons with the Demon Deacons, primarily as a starter, will presumably will be taking over under center for Marcus Freeman’s team. Last year, the Fighting Irish went 9-4 with Drew Pyne and Tyler Buchner operating the offense. Pyne has since transferred to Arizona State, leaving just Buchner on hand.

Clearly, the Fighting Irish weren’t satisfied with that situation, and were actively pursuing a potentially more impactful option at QB. With Hartman, they’ve done just that. 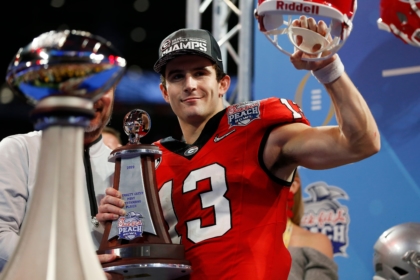 There were several moments throughout the 2022 college football season where Hartman appeared to be one of the better quarterbacks in the nation. For example, his 458-yard, five-touchdown performance against Army earned him the Davey O’Brien National Quarterback of the Week honors, in addition to several other awards.

In all, Hartman led an efficient campaign, helping Wake Forest begin their season 8-0, their best start in school history. He did so by posting excellent numbers.

It was an impressive display for a player who had been dealing with a non-football related medical condition (blood clot) back in August. Fortunately, Hartman was able to get back on the field in time to start Wake Forest’s first matchup of the season, where he threw for 400 yards and four touchdowns.

He has above-average arm strength and isn’t afraid to fit the ball into tight windows. Hartman spreads the ball around and goes through his progressions as one would expect a sixth-year senior to.

Hartman, who stands at 6-foot-1, brings 48 games of experience and nearly 13,000 passing yards to Notre Dame and should immediately boost their passing offense. It’s a much-needed improvement for a team that ranked 42nd in scoring in 2022.