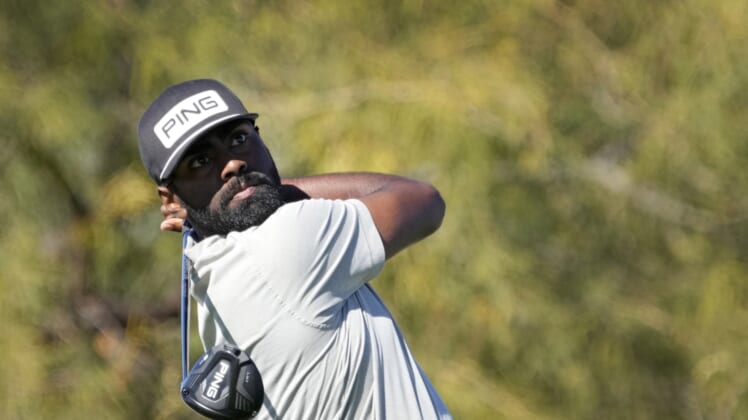 After finishing up his first round on a sour note early Friday morning, PGA Tour rookie Sahith Theegala made up for it with a 7-under-par 64 to jump out to a two-shot lead after two rounds of the Waste Management Phoenix Open in Scottsdale, Ariz.

Theegala stood at 7 under through 16 holes Thursday when play was suspended due to darkness. He returned to TPC Scottsdale on Friday and closed his promising first round with back-to-back bogeys.

However, his second round of eight birdies and just one bogey propelled him to 12-under 130, two strokes ahead of Brooks Koepka and Xander Schauffele. Patrick Cantlay is alone in fourth at 9 under.

“I wasn’t too upset about the way (the day) started,” Theegala said. “Like I had a 15-footer to start the day, so I was like, ‘OK, I just put a good roll on it and see what happens.’ I put a good roll, just missed.

“And the next tee shot I put it under the lip of the fairway bunker and I’m like, ‘OK, I can’t do much about that, right?’ And I knew if I kept putting the ball in the fairway I’m going to have scoring opportunities, so it was nice to reset for the 30 or 40 minutes that I had in between the rounds there.”

Theegala, a three-time All-American at Pepperdine University, is playing the event on a sponsor’s exemption arranged by his agent. His only career top-10 finish on tour came last October at the Sanderson Farms Championship, where he tied for eighth.

He is aiming to become the fifth player since the start of the 2014-15 season to win an event after entering on a sponsor’s exemption. The list currently includes Martin Laird (2020 Shriners Children’s Open), Matthew Wolff (2019 3M Open), Billy Hurley III (2016 Quicken Loans National) and Padraig Harrington (2015 Honda Classic).

Koepka carded his second straight 66. He leads the field in greens in regulation through two rounds, hitting 32 of 36.

Schauffele made four birdies on the front nine en route to a bogey-free 65 to move into a tie with Koepka. Cantlay also kept bogeys off his card and shot a 66.

“I drove the ball and putted really well today,” Cantlay said. “I didn’t hit a lot of great iron shots, but I hit a couple close coming down the stretch. … When the greens are this good and you can get in a nice rhythm, you can make a bunch of putts out there, and today I did.”

Theegala’s 64 was tied for the low round of the day with Talor Gooch and Sam Ryder. Gooch is tied for fifth with Max Homa (65 on Friday) and Canada’s Adam Hadwin (68) at 8 under. Ryder is tied for 13th at 6 under.

Gooch rolled in four birdies on the front nine and three on the back nine while remaining bogey-free. One of his birdies came at the par-3 16th, famous for its enclosed stadium seating.

Notables who missed the cut included Harold Varner III (2 over), who won the Saudi International last week, and Norway’s Viktor Hovland (2 over), who has risen to No. 3 in the Official World Golf Ranking.