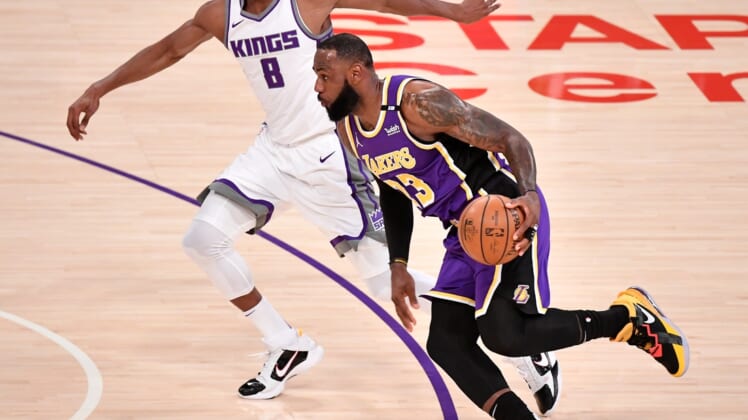 Terence Davis scored 10 fourth-quarter points Friday, and the visiting Sacramento Kings rallied for a 110-106 victory over the Los Angeles Lakers, spoiling the return of LeBron James from injury.

The Lakers led by 10 points at the end of the third quarter, but the Kings outscored Los Angeles 32-18 in the fourth.

Los Angeles had a chance to retake the lead late, but James’ long 3-point attempt bounced hard off the back of the rim with 2.7 seconds left. Sacramento’s Tyrese Haliburton subsequently sank two free throws to seal the outcome.

The Kings earned their first victory against the Lakers at Staples Center since 2018. Even more impressive, Sacramento won the game without frontline players De’Aaron Fox (health and safety protocols) and Harrison Barnes (left abductor tightness).

Haliburton paced the Kings with 23 points and 10 assists. Richaun Jones added 22 points and nine rebounds, and Davis had 15 points.

The Lakers lost for the fifth time in six games.

James returned to the floor after the longest absence of his NBA career, 20 games. At times, he looked as if he never left.

James finished with 16 points, eight rebounds and seven assists in 32 minutes. Lakers coach Frank Vogel said pregame that the 36-year-old star would not have a minutes restriction and the team would be responsible with his playing time.

With James out since March 20 due to a right high ankle sprain, the Lakers were 8-12 in his absence.

Anthony Davis led the Lakers with 22 points and 11 rebounds. Andre Drummond totaled 17 points, and Ben McLemore added 12 points off the bench, shooting 4-for-7 from beyond the 3-point arc.

Alex Caruso missed his second game in a row for the Lakers with back spasms.

The Lakers (36-27) host the Toronto Raptors on Sunday in the second game of a three-game homestand.

The Kings (26-37) face the Dallas Mavericks on Sunday in the second game of a four-game road trip.

Sacramento, which shook off a 49-point loss to the Utah Jazz on Wednesday, has alternated losses and wins over its past eight games.