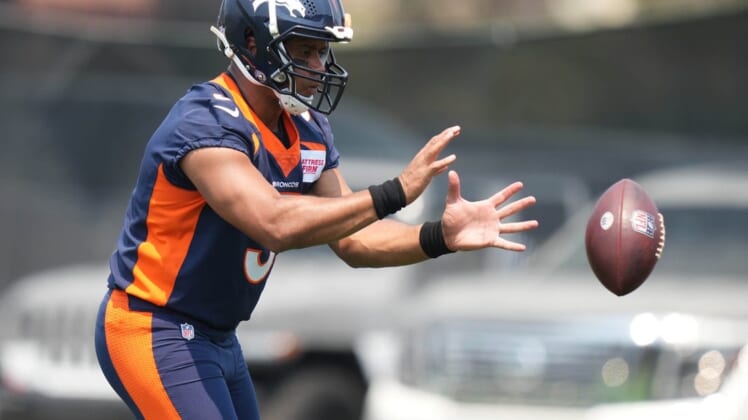 “I feel extremely confident in what we’re doing,” Wilson told reporters. “We look really good. We’re going against a great defense every day. That’s the challenge we want every day — to go against the best. Our defense is the best of the best, and we’re getting better every day.

Wilson is in his first offseason with the Broncos after spending the first decade of his NFL career in Seattle. The nine-time Pro Bowler waived his no-trade clause in March, and the Seahawks shipped him to Denver.

Wilson — who had commented on his desire for more offensive line help while with the Seahawks — praised the O-line and other units to the media Monday.

“I’m really excited about the offensive line,” Wilson said. “I think those guys are doing a great job up front giving me enough time and blocking it up for me. Everybody’s terminology and everybody is understanding the game, the whys of the game and the obsession with it.

“We’re going to have a really good football team. The running backs we have, the tight ends, the receivers and the line. I think we have a chance.”

Wilson said he would spend time throwing to teammates in Southern California before the Broncos must report for training camp in late July.

“It’s funny. When it first started, you’re like, ‘Whoa, are you going to be able to pick this stuff up? Are we going to be able to own the offense like we want to?'” Hackett said. “But he does such a great job of surrounding himself with great people that help him out so he can still do all of these things and still focus solely on football.

“It’s unbelievable to watch. Every single second that he has, he’s non-stop working. If he’s on a plane, he’s watching film, he’s studying, he’s calling people and he’s calling me. That’s what you appreciate.”

The Super Bowl XLVIII champion said in March that he wanted to win “three, four more Super Bowls” while finishing his playing career in Denver. The Broncos have won three championships since 1997, two behind John Elway and one with Peyton Manning under center.