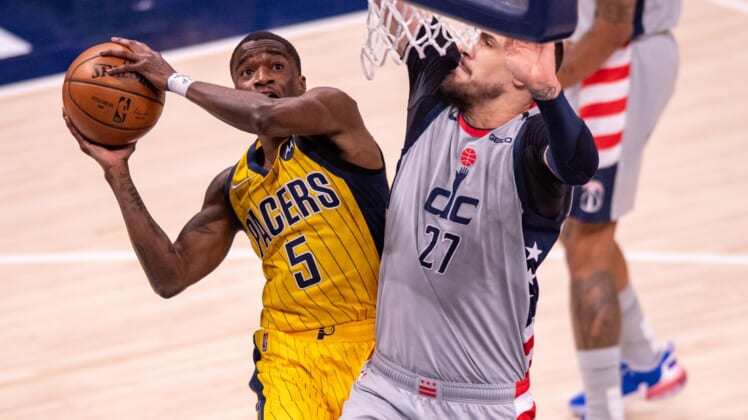 Russell Westbrook recorded the 181st triple-double of his career, tying Oscar Robertson’s all-time NBA record, and hit the game-winning free throws with one second remaining in overtime to lead the Washington Wizards to a 133-132 win over the Indiana Pacers on Saturday in Indianapolis.

Westbrook finished with 33 points, including Washington’s final two points in regulation on a finger-roll in traffic, and game-highs of 19 rebounds and 15 assists. His effort, coupled with Beal’s 19-of-31 shooting from the floor, was just enough to outduel strong showings from Domantas Sabonis and Caris LeVert.

Sabonis recorded a triple-double for Indiana (31-36) with 30 points, 13 rebounds and 13 assists. LeVert scored 35 points for his third game of 30-plus points in the past four, and he was clutch in the second half.

LeVert scored 16 points in the third quarter, including a one-legged, sideways-running 3-pointer in the period’s final seconds.

As Washington whittled down the fourth-quarter gap, LeVert answered both times the Wizards took the lead: first hitting a 3-pointer with 1:15 to play, then making a driving layup with 13.4 seconds left that ultimately forced overtime.

LeVert scored on a lay-in with 2:34 to go in OT, giving Indiana a four-point lead. Washington’s Davis Bertans sank a 3-pointer on the next possession, and a Westbrook basket pushed the Wizards ahead.

Justin Holiday blocked Westbrook’s first attempt to recapture the lead in the final seconds of overtime. After a Wizards timeout, Westbrook drew a foul on his jump-shot attempt, and he sank the game-winning foul shots.

The victory lifted Washington ninth place in the Eastern Conference, a half-game ahead of Indiana as they jockey for position in the play-in tournament.