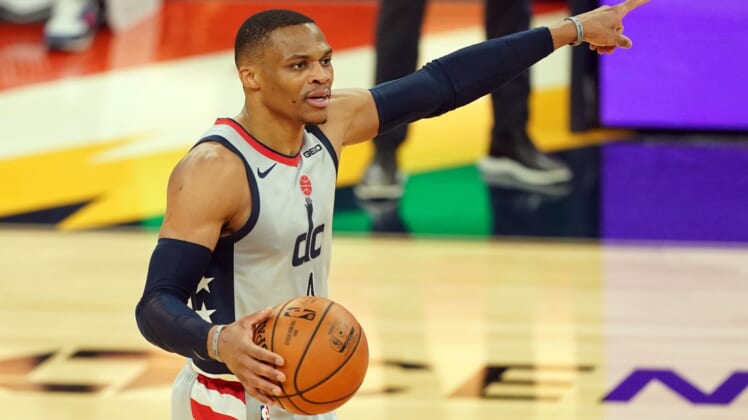 Russell Westbrook is, simply put, a freak of nature in the best way possible. How many 6-foot-3 point guards can maintain their explosiveness at 32 and attack the rim with woeful abandon while also dishing the ball and grabbing double-digit rebounds seemingly every game? The answer: one. Westbrook is doing things that no one’s seen before and that’s led to numerous personalities singing his praises.

Read More: Top 6 storylines for the remainder of the NBA regular season

Russell Westbrook is a Dimer

Regardless of what anyone thinks, Westbrook is purely a point guard — he’s always been listed as a point guard. That said, a point guard’s responsibility is to initiate the offense and set up his teammates. Though Westbrook has often taken it upon himself to be a team’s entire offense – look no further than his subpar shooting performances – there is no doubt that he can find his teammates with the best of them.

In the last six years, Westbrook has averaged double-digit assist numbers in five of them — with the lone exception being 2019-20 when James Harden was the de facto lead guard for the Houston Rockets. For his career, Westbrook is averaging 8.5 assists per game, currently third behind Chris Paul (9.4) and John Wall (9.1) for the most among current players.

If that list is expanded to include former players, Westbrook is ninth all-time, dishing out three fewer assists than Magic Johnson’s 11.2 per game (which is the highest all time). It’s not outside the realm of possibility to see Westbrook potentially leap-frogging Wall. That would require the former to continue putting up astronomical assist totals for the rest of his career. Right now, Westbrook’s 11.2 assists and 47.5% assist rate leads the league this season.

At any rate, Westbrook racks up assists and turns it over more than any player this season.

There’s no doubt Westbrook can put the ball in the hole. His career 23.2 points per game average as a point guard is fourth all-time, behind Oscar Robertson’s 25.7, Damian Lillard’s 24.5 and Stephen Curry’s 24.1. However, compared to the latter three, Westbrook has not been nearly as efficient shooting the ball.

For his career, Robertson hit 48.5% of shots from the field and 84% from the free-throw line (three-pointers didn’t exist when Big O played). Meanwhile, Curry is the greatest shooter of all time and a quick dive into his career statistics prove as much. Though Lillard has a slightly lower field-goal percentage (43.7%) than Westbrook (43.8%), Lillard’s ability to hit threes (37.4%) and free throws (89.3%) compared to Westbrook, 30.5% and 79%, respectively, is what holds Westbrook back.

While Westbrook averages more points than other noted point guards such as Steve Nash, John Stockton or Isiah Thomas, he didn’t do it nearly as efficiently as any of the aforementioned players. When compared to Chris Paul, Westbrook’s inefficiency is magnified even more. Paul is a career 47% shooter from the field, hitting 37% of his threes and shooting almost 90% from the free-throw line (87.2%).

To his credit, Westbrook does take a good portion of his shots inside the paint and has the second-highest usage percentage in NBA history. More often than not, he’s forcing the issue and leads to bad shots.

With all the responsibilities on the point guard, some aspects of the game are left in the locker room. Typically, it’s either defense, rebounding or both. In Westbrook’s case, it’s neither.

Going strictly by the “eye-test,” Westbrook may not seem fully interested in playing defense. However, advanced analytics tell a different story. Based on Defensive Win Shares (DWS) – essentially how many wins a player contributes due to defense – Westbrook’s 2.7 DWS this year is second among all pure point guards, trailing only Ben Simmons (3.1). Altogether, Westbrook’s 43.65 DWS is good for 74th all-time and is top-10 among all point guards in NBA history.

Regarding his rebounding, it’s simply on another level. There are no other players relatively close to his size that average anything near his rebounding totals.

It’s highly unlikely he ever catches up to Jason Kidd’s 75.1 DWS, the most among all point guards or even gets mentioned in the same sentence as Gary Payton when it comes to all-time best defensive point guards. Nonetheless, Westbrook can still be an adequate defender when he feels like it. However, considering the amount of work he’s been given every single night, it makes sense if he’d want to take a few plays off on that end of the floor.

Read More: Why Stephen Curry is undoubtedly the greatest NBA shooter of all time

Is Russell Westbrook the second-best point guard of all time?

Comparatively speaking, Westbrook doesn’t distribute the ball or hold onto the ball as well as Johnson or Paul and isn’t a good a shooter as Curry, Lillard, Stockton, Nash, or Paul. His defense is very adequate and his rebounding is otherworldly. Taking all this account, it’s very easy to slide Westbrook in as the third-best point guard of all time when it is all said and done, even with his flaws, above Curry and Stockton.

Even if he isn’t the second-best point guard of all time, being top-five in anything is an accomplishment and Westbrook should be proud of that.