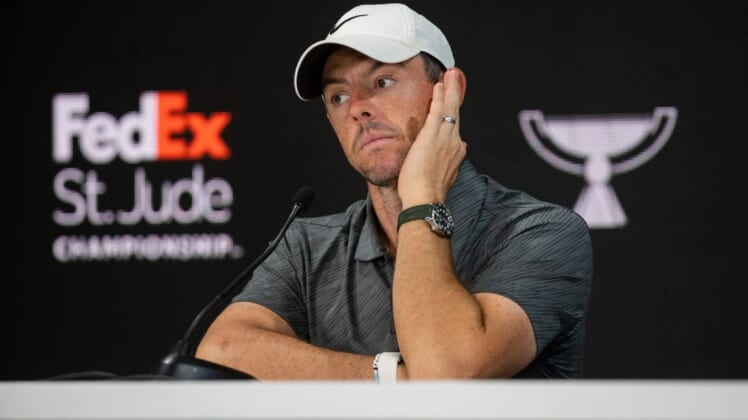 For a golfer who doesn’t enjoy playing the role of spokesperson for the PGA Tour, Rory McIlroy has been liberal with his opinions about the LIV Golf Series and peers who have jumped ship to the circuit.

Wednesday was no different.

McIlroy addressed the court ruling that upheld the PGA Tour’s ban of a trio of players who filed a temporary restraining order to play in the FedEx Cup Playoffs that begin this week in Memphis, Tenn.

“From my vantage point, common sense prevailed and I thought it was the right decision,” McIlroy said Wednesday. “I think it just lets us focus on the important stuff, which is the golf, and we can all move forward and not sort of have — not have that sideshow going on for the next few weeks, which is nice.”

LIV Golf members Talor Gooch, Hudson Swafford and Matt Jones went to court in the hopes of playing in the first event of the playoffs, the St. Jude Classic at TPC Southwind. The trio had qualified to be included, until they broke ranks and joined LIV.

“I think where the resentment comes from from the membership of this tour is the fact that they want to try to get their way back in here with no consequences, and anyone that’s read the PGA Tour handbook or abided by the rules and regulations, that would feel very unfair to them,” McIlroy said.

“It was a good day for the Tour and for the majority of the membership yesterday.”

McIlroy was later asked if he enjoyed or relished the opportunity of being a veritable spokesperson for the Tour.

“Not really,” McIlroy said. “I don’t feel like it’s my job to be up here and stick up for the Tour or be a spokesperson. It’s just sort of the role that I found myself in, especially coming on the PGA Tour board this year, it was a great time to agree to do that.”