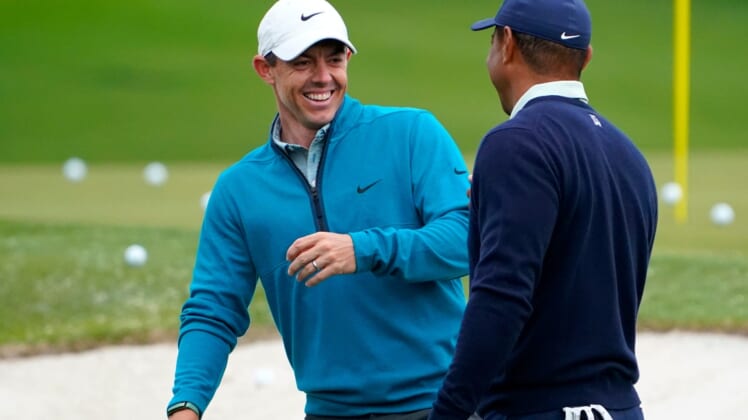 Northern Irishman Rory McIlroy is not the center of attention at this week’s Masters in Augusta, Ga. All eyes will be on Tiger Woods as he attempts to make his return to competitive golf less than 14 months after a serious single-car accident.

That could translate into less pressure on McIlroy to finally break through at the lone major that’s elude him in his career. Not only has McIlroy failed to win a major in nearly a decade (since 2014), he’s come up shy at the Masters seven straight times when a victory would have completed his career Grand Slam.

Woods or no Woods, McIlroy said Tuesday that he has felt less pressure as time has gone on to snap his major drought and complete the Slam.

“At the start I’m maybe at a different stage of my life where, back then, golf was everything,” McIlroy said. “Obviously, look, it’s still very, very important, but maybe back then I would think that — I don’t know if I would feel like I was fulfilled if I didn’t win one or whatever it is, but it’s less pressure.

“I know if I play well, I’ll give myself chances to win this golf tournament,” he added. “It’s just a matter of going out there and executing the way you know that you can and stick to your game plan and be patient and be disciplined and all the things you need to do around Augusta National.”

McIlroy returns after missing the cut at last year’s edition, his first MC at Augusta since 2010. The four-time major champion shot 76 and 74 to finish 6 over.

His best shot at completing the career Slam was his first, in 2015. He shot a final-round 66 to finish fourth at 12 under, but Jordan Spieth had run away from the pack by then and held on to win.

“You know, if I think back to 2015 when I was coming off that run, yeah, there’s certainly less pressure, I feel, than there was then,” McIlroy said.

The 32-year-old said he tries to block out the news during a week like this, though it has helped to have the crowds focus on Woods.

“We were on the ninth green when Tiger and J.T. and Freddie teed off yesterday (in a practice round), and it was a mass exodus from the ninth green to the first tee, and then the back nine was lovely and quiet,” McIlroy said. “That’s a nice way to get through the first week and sort of go about your preparation, I guess, unhindered.”