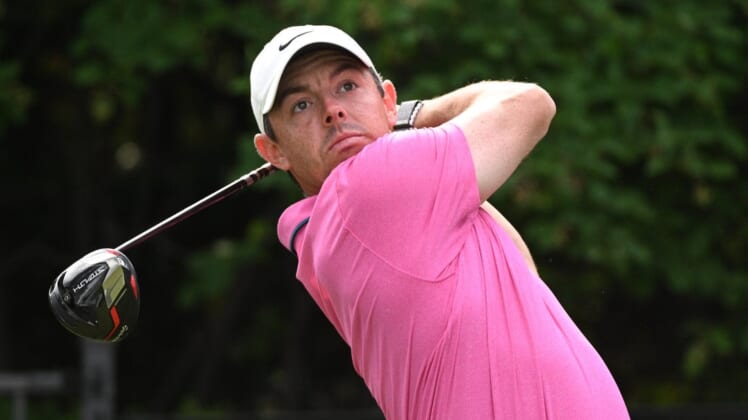 Defending champion Rory McIlroy birdied his final two holes and shot an 8-under-par 62 Sunday to stave off a number of fellow stars and win the RBC Canadian Open at St. George’s Golf and Country Club in Toronto.

The four-time major champion from Northern Ireland earned his 21st career PGA Tour win. He won the Canadian Open in 2019 at a different site, Hamilton Golf and Country Club, and in the two years since the tournament has been on hiatus due to the COVID-19 pandemic.

When the moderator of his press conference introduced him, saying he’d won for the 21st time, McIlroy interjected, “And one more than Norman.”

“I feel like it’s getting tougher and tougher to win on the PGA Tour,” McIlroy said. “Just look at the two guys that I played with today. I went out with a lead and had to shoot 8 under par to get the job done. So the depth of talent on this tour is really, really impressive. And going up against guys like JT and Tony and coming out on top, that’s something to feel really good about. …

“And then, look, I alluded to it, I had extra motivation of what’s going on across the pond,” he added later. “The guy that’s spear heading that tour has 20 wins on the PGA Tour and I was tied with him and I wanted to get one ahead of him. And I did. So that was really cool for me, just a little sense of pride on that one.”

McIlroy started off hot with a 5-under 29 on the front nine, the first time he’s broken 30 through nine holes in his decorated PGA Tour career. But after getting to 8 under through 12 holes, he stuttered, bogeying two par 3s in a four-hole stretch.

At the par-4 17th hole, McIlroy sent his approach shot out of the first cut of rough to inside 3 feet for a birdie. Needing at least par at No. 18, he dialed in another sharp approach and made a 4-foot birdie tap.

Thomas, still hot off his recent PGA Championship victory, was tied with McIlroy at 17 under after the 16th. Thomas had birdied eight of his 14 holes, but a bogey-bogey finish took him out of the running and consigned him to a 64.

Finau made six birdies and no bogeys for his own 64. He drained a 42-foot birdie putt on the final hole to reach 17 under and ensure himself the solo second finish.

“Played really nicely all week,” Finau said. “Knew I was going to have a chance to win today if I just kind of stuck to my stuff. And I did. We were within one there going to the last couple, so I knew I had an opportunity in front of me. But Rory played great, he closed it out and hats off to him on a week like this. That’s fantastic playing on the weekend.”

England’s Justin Rose came tantalizingly close to a 59, but bogeyed two of his final three holes and settled for a 60. He tied for fourth at 14 under with Sam Burns (65).

Rose tallied three eagles on the day. He holed out from the fairway at the par-4 first, made a 29-foot eagle putt at the par-5 11th and had just an easy 7-footer for eagle at the par-5 15th.

After bogeying No. 16, he responded with a birdie at the 17th to get back to 11 under for the round. But his second shot at No. 18 sailed over the green and he couldn’t get up and down for par to preserve the 59.

“I’m totally disappointed, yeah,” Rose said. “Because you know what’s at stake, for sure. You’re really just playing the last hole — I never shot 59 before — so it would have been a lovely footnote on the week. I don’t know how much was in my control or not, but (for the approach on 18) we were right in between two clubs and a decision and I went the wrong way on a decision and paid the price for it.”

Corey Conners was the top Canadian, placing sixth at 12 under after a final-round 62.

Keith Mitchell (66) and Wyndham Clark (69) both qualified for next month’s Open Championship with their tied for seventh finish at 10 under, tying with Chris Kirk (66).