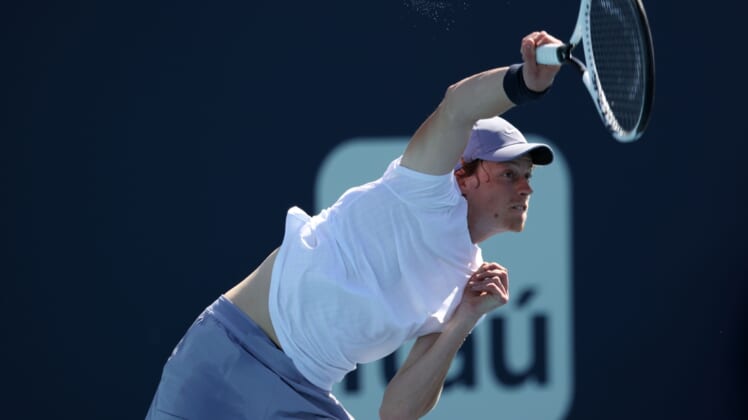 A mid-match surge led seventh-seeded Roberto Bautista Agut to a 6-4, 6-2 upset of top-seeded Daniil Medvedev on Wednesday in the quarterfinals of the Miami Open.

Bautista Agut, a 32-year-old Spaniard, won the last three games of the first set, including the set’s lone service break for a 5-4 lead. He broke again to start the second set before closing out the one-sided victory.

“I want to give Daniil all the credit. I know he is one of the best players in the world,” Bautista Agut said post-match. “He’s been winning a lot of matches, he’s No. 2 in the world, so I’m very happy and proud about how I played today. I think I showed a great level on the court.”

“It was a very tough match in Dubai, and it was a very tight score,” Bautista Agut said. “He’s playing great, he’s very solid and he has very good strokes. I think I’ll have to play another good match like tonight.

“Jannik is playing great. … I have to say he will be one of the best players in the world.”

Sinner, a 19-year-old who is ranked 31st on the ATP Tour, used 28 forehand winners to advance in 1 hour, 41 minutes against Bublik, who mixed in an array of underhanded serves and other tactics to try upsetting Sinner’s rhythm.

“We had a tough battle two weeks ago in Dubai. (It was) tough here today as well,” Sinner told Tennis Channel. “It was strange today. He was changing the game. … I never had this kind of match, to be honest. … I just tried to stay there, stick into the match and I am happy about my performance today.”

Sinner had to rally from 0-3 down in the second set to beat the Bublik for the second time this year. Bublik lost to Sinner at the Dubai Tennis Championships.

In the 36-year history of the Miami Open, Sinnik is the eighth teenager to reach the semifinals. Five of the seven other teenagers to get this far have earned the No. 1 spot in the FedEx ATP Rankings.

Sinner is also the second Italian player to reach the final four in Miami. Fabio Fognini made it to the semis in 2017.

The last two quarterfinals will be contested Thursday. Second-seeded Stefanos Tsitsipas of Greece will oppose 26th-seeded Hubert Hurkacz of Poland, and fourth-seeded Andrey Rublev of Russia will square off with unseeded Floridian Sebastian Korda.