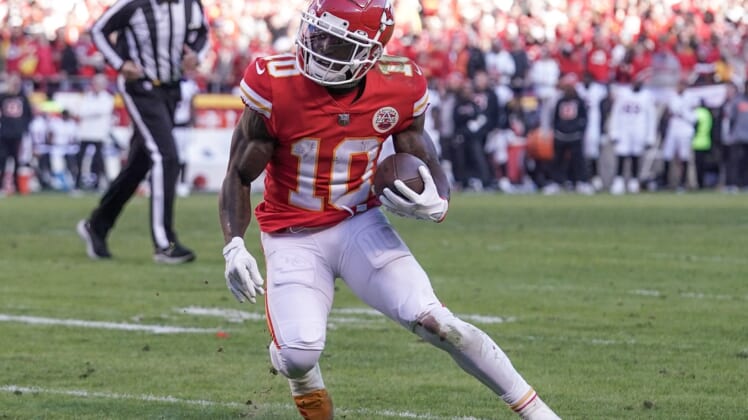 The Kansas City Chiefs have given dynamic All-Pro wide receiver Tyreek Hill permission to seek a trade amid stalled negotiations on a contract extension, NFL Network and ESPN reported Wednesday.

Hill rejected an extension that would have made him one of the highest-paid receivers in the league, per the report. It’s unclear how the offer compared to Davante Adams’ new deal ($28.25 million annual average value) in Las Vegas.

The New York Jets and Miami Dolphins are at the forefront of teams vying to acquire Hill, per ESPN.

Hill is expected to get a massive extension and the Chiefs a big haul in return if a trade is completed.

Hill, 28, is a three-time All-Pro in his six seasons in Kansas City. He has made the Pro Bowl every year he’s been in the league. He has 479 career receptions for 6,630 yards and 56 touchdowns in 91 games (73 starts) for the Chiefs. He has another 719 yards rushing with six TDs.

The Chiefs selected Hill in the fifth round of the 2016 draft.

The 2022 NFL Draft is thought to be the “deepest in a decade” at wide receiver, per Field Level Media draft analyst Mark Jarvis.