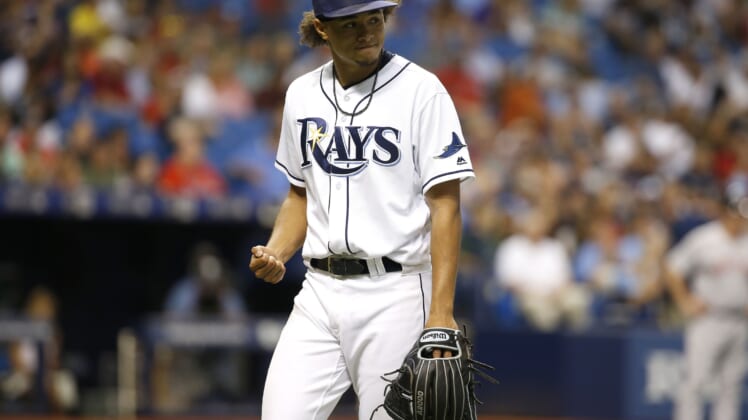 The Pittsburgh Pirates have struck with one of the biggest moves at the trade deadline, acquire starting pitcher Chris Archer from the Tampa Bay Rays.

Source: Chris Archer to the Pittsburgh Pirates is done.

Tampa Bay reportedly netted a strong return for the ace of its rotation.

Sources: The Rays will be getting Austin Meadows and Tyler Glasnow back in the deal for Chris Archer. @JimBowdenGM first mentioned them as possibilities.

Pittsburgh won out negotiations in a crowded field of N.L. teams and ultimately delivered a double blow to their divisional foe in the Milwaukee Brewers. Both teams desperately needed a starter for the front of their rotation but Pittsburgh emerged as the highest bidder.

Archer is one of the most interesting starting pitchers on the market in recent years. Long coveted by teams, the Rays finally opted to trade him away this year with the emergence of Blake Snell.

This season has been filled with peaks and valleys for Archer. In 17 starts, he recorded a 4.31 ERA with 11 home runs allowed and a 1.39 WHIP. It would also mark the third consecutive season with a 4.00-plus ERA for the right-handed pitcher.

Yet when teams look at the 29-year-old’s peripheral stats like his career 25.7 percent strikeout rate, 18 percent K-BB rate and an outstanding swing-strike rate, it shows a potential ace.

Fortunately, Pittsburgh is known for having a great coaching staff and that could pay big dividends for both sides. Furthermore, Archer now moves away from the A.L. East and settles into a more friendly environment for pitchers.

Most importantly for the Pirates, Archer has a team-friendly contract. He is owed $7.6 million in the 2019 season, then the team will have team options for each of the next two seasons at $8.25 million.