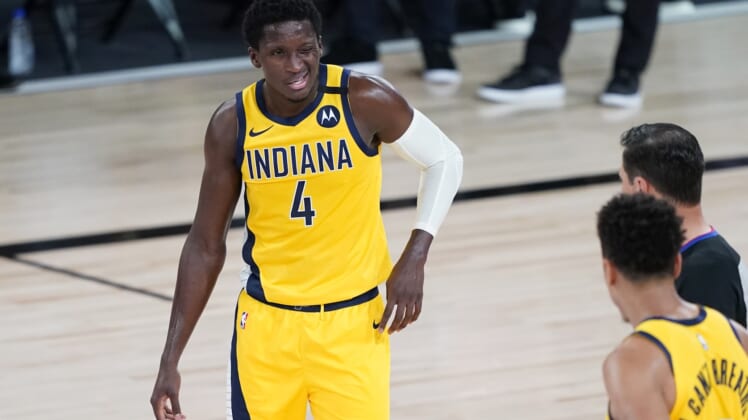 Changes are coming for the Indiana Pacers following their four-game sweep at the hands of the Miami Heat in the first round of the Eastern Conference Playoffs.

This includes the team moving on from head coach Nate McMillan after four consecutive postseason appearances.

Bleacher Report’s Eric Pincus just noted that NBA insiders expect the Pacers to move on from the star guard in a trade this fall. “I bet they trade him,” one Eastern Conference executive said of Oladipo.

The two-time All-Star is entering the final year of his contract valued at a rather cheap $21 million. At issue here is drama surrounding Oladipo and his initial decision to opt out of resuming the 2019-20 season before he ultimately decided to join his team in Orlando. It has caused a rift behind the scenes.

Oladipo, 28, has also played in just 55 games over the past two seasons after suffering a serious leg injury during the 2018-19 campaign.

In addition to the former No. 2 overall pick becoming a free agent following the 2020-21 season, there’s issues as it relates to regression on the court and the above-mentioned injury.

Oladipo averaged just 14.5 points on 39% shooting from the field during the regular season. He went on to shoot under 40% in Indiana’s four-game series sweep at the hands of the Heat.

It’s highly unlikely that interested teams are going to pay a premium to acquire Oladipo. With that said, there’s going to be interest in his services.

If the Pacers can get a couple nice rotational pieces for Oladipo, they will more than likely trade him.