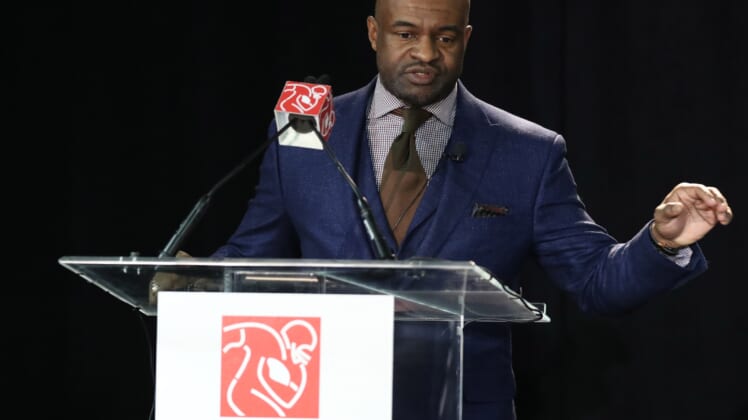 As the 2020 NFL season draws closer, it looks a fight between the NFL and the NFL Players Association is looming over how the league will handle billions in lost revenue this year.

While the league anticipates having a full 2020 NFL season, it’s projected to come with a massive revenue hit. Facing billions of dollars lost from a drop in stadium attendance and consumer spending, the NFL is already trying to brace for the economic hit.

The NFL proposed to the NFL Players Association that the league could withhold 35% of player salaries, holding millions of dollars in owed salaries until paying them at a later date. However, per NFL Network’s Mike Garafolo, there’s no chance the NFLPA goes for it and the union is ready to battle the league on the matter.

Both the league and the players’ union understand difficult decisions must be had to determine how to share the economic blow from the lost revenue. The divide between the two sides on how to balance the financial hit is problematic, given an agreement is needed for the NFL season to start.

The NFLPA is pushing for the league to implement a flat cap for the 2021 NFL season. Both sides have discussed the matter, which would borrow from projected revenue for future seasons to keep the 2021 salary cap from plummeting.

While the NFL could lose more than $4 billion if there is a full 2020 season without fans, the situation gets war worse if football can’t be played this year. Unfortunately for everyone involved, that looks increasingly likely.

The NFLPA’s president has raised concerns about starting the NFL season at a time when the COVID-19 pandemic is worsening with cases spiking across the country. Multiple NFL stars, including Dallas Cowboys running back Ezekiel Elliott, have expressed uncertainty about playing during a health crisis.

The fear isn’t just felt by the players. Multiple coaches and general managers are concerned about the NFL’s lack of planning and communication, nervous about what it might mean for the season. Several club owners are also worried that the worsening pandemic could lead to the season being canceled.

While the league is sticking to its schedule, with players scheduled to report for training camp in a few weeks, it’s clear there is no guarantee fans will see football this fall.