Report: NFL owners ‘watching their spending’ due to fears of revenue hit from 2020 season 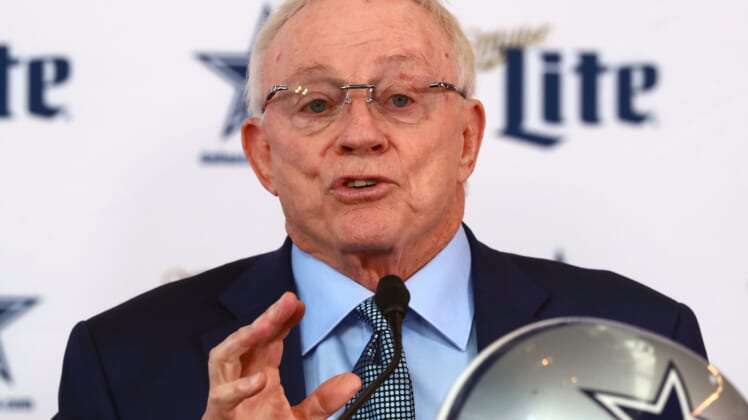 The 2020 NFL season is just a few months away. Before the schedule kicks off, though, the league is bracing for difficult discussions around the NFL salary cap with team owners bracing themselves for a staggering hit to NFL revenue.

While the upcoming NFL season is still expected to happen, games could be played without fans in attendance. As a result, NFL owners are already preparing for dramatic changes that will impact the league this season and next.

NFL stars like Dak Prescott, Patrick Mahomes, Jamal Adams and George Kittle are all heading into the summer hoping to sign record-breaking contract extensions this offseason. Unfortunately, for many of them, some of those contract extensions might be on hold.

According to ESPN’s Dan Graziano, NFL owners have already started to watch their spending this summer out of concern with a looming revenue hit. Fears of a second wave for the coronavirus, which could devastate the 2020 NFL season, have many around the league concerned.

While the NFL wants to keep on track with its schedule, the league reportedly hasn’t ruled out playing games without fans, delaying the start of the season or even canceling games.

The NFL would stand to lose billions in revenue if a full 2020 schedule is played without fans in attendance. Even if partial capacity is allowed at stadiums across the country, it could still put the league at risk of shaving upwards of $10 billion off the salary cap, which could dip from $198.2 million this season to far below it next year.

As a result, NFL teams are taking their time signing their picks form the 2020 NFL Draft to their rookie deals. While a few players, including Tua Tagovailoa, only two of the 32 first-round picks have signed. At this time last year, per ESPN, 20 of the first-round selections from the 2019 NFL Draft had signed.

While the NFL anticipates a dip in the 2021 salary cap due to the COVID-19 pandemic, many around the league don’t believe it will have long-term ramifications.

According to ESPN, NFL teams expect this to be a one-year blip that will just impact the 2021 NFL season. The league will have the option to implement a flat cap, which would spread out the hit from this season across the new collective bargaining agreement.

Given the NFL will have new broadcasting deals with its top networks by 2022, which will send the salary cap skyrocketing, the long-term outlook for owners and players remains promising.