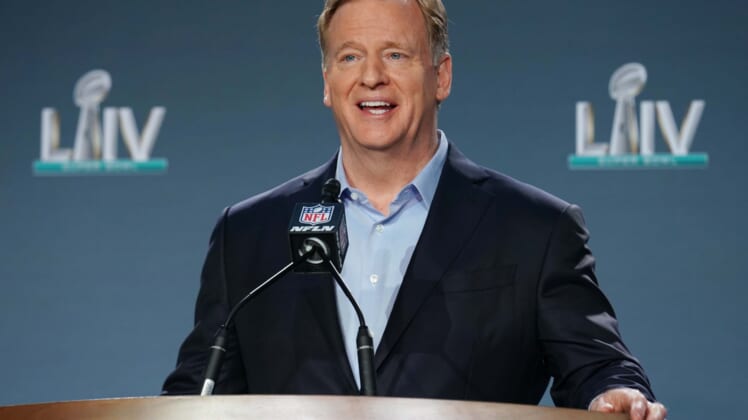 As players begin to decide on a new offer for a collective-bargaining agreement, the NFL is now hoping a new CBA can be reached in the coming weeks so it can turn its attention to signing record-breaking media deals this offseason.

According to The Wall Street Journal, if the NFL and NFLPA can come to terms on a new CBA within the next few weeks, it will allow the NFL to move into negotiations with major networks on historic long-term deals for the league’s broadcasting rights.

However, both sides are reportedly also feeling the pressure to get a deal done shortly. If both sides can’t reach an agreement on a new CBA, even with the current deal not set to expire until March 2021, the league is in jeopardy of losing significant leverage in negotiations with Walt Disney Co. (ESPN), ViacomCBS, FOX and NBC. The networks are also ready to negotiate new deals when the NFL is ready, per The Wall Street Journal.

The league is reportedly fearful that its television ratings will experience a significant decline during the 2020 season when it starts competing with the 2020 election cycle, which happened in 2016. As a result, the NFL is eager to move quickly regarding a new CBA with players to reach a 10-year agreement.

Unfortunately for both sides, the proposed 17-game schedule in the future remains a hurdle for many players. However, NFL owners could potentially convince players to accept the additional game in exchange for an even bigger spike in revenue along with more accommodations in the new CBA.

Players would stand to benefit from record-breaking media deals as well. Over the life of a new CBA, it could generate billions in increased revenue for players and reports indicate that it is helping push them towards a resolution.

The NFL continues to dominate over every other professional sport in terms of popularity and revenue generated. It’s in everyone’s best interest to get a new CBA done, which would lead to even more financial gains for everyone.