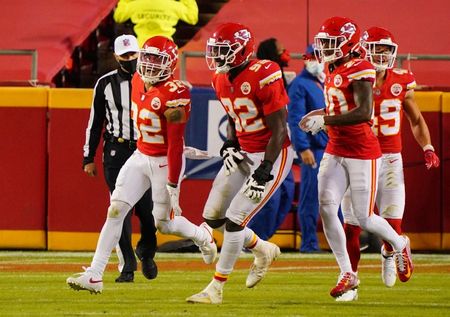 Kansas City Chiefs players and personnel tested for COVID-19 were all negative on Tuesday, but results are being eagerly anticipated Wednesday following news of additional concerns in New England.

ESPN reported the Chiefs would undergo testing Wednesday before a decision is made about the team’s practice schedule.

Patriots cornerback Stephon Gilmore, who played in Monday’s game at Kansas City, tested positive for COVID-19 on Tuesday. The Patriots canceled Wednesday’s practice, and their Week 5 game at home against the Denver Broncos on Sunday could be in peril.

The Las Vegas Raiders are scheduled to play at Kansas City on Sunday as part of the Week 5 schedule, but defensive tackle Maurice Hurst was placed on the reserve/COVID list on Tuesday. The Raiders were disciplined by the NFL for attending a fundraiser without masks, and tight end Darren Waller was fined $30,000.

Hurst is the fourth-highest graded defensive tackle in the NFL this season, according to Pro Football Focus.

Gilmore, the NFL Defensive Player of the Year in 2019, and quarterback Cam Newton have tested positive for COVID-19. A third player, practice squad defensive lineman Bill Murray, also is on the Patriots’ reserve/COVID list.