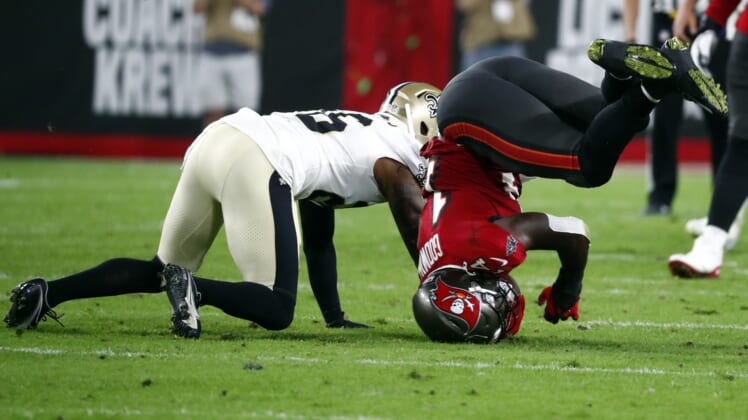 Godwin was injured after taking a hard hit to his right knee early in the second quarter of the Buccaneers’ 9-0 loss to the New Orleans Saints on Sunday.

Fellow Pro Bowl wide receiver Mike Evans (hamstring), running back Leonard Fournette (hamstring) and Lavonte David (foot) were also injured during Sunday’s game. NFL Network reported the injuries to Evans and Fournette are not expected to be “major” in severity, with the latter perhaps missing a game or two.

The passing game could receive a boost with the expected addition of Antonio Brown, who completed a three-game suspension after an NFL investigation determined he produced a fake COVID-19 vaccination card.

While a three-week timetable would make Godwin a candidate for injured reserve, the Tampa Bay Times reported that the Buccaneers have yet to make that decision.

Godwin, 25, has posted team-leading totals in catches (98) and receiving yards (1,103) to go along with five receiving touchdowns. He also has rushed for a score in 14 games this season.

Evans, 28, leads the Buccaneers with 11 receiving touchdowns. The three-time Pro Bowl selection has 64 catches for 899 yards in 14 games this season.

“It was big,” Buccaneers coach Bruce Arians said Sunday of the injuries. “The young guys, I was hoping they’d step up a little bit more — the receivers. Overall, we just dropped too many balls.”

Fournette, 26, leads the team in carries (180), rushing yards (812) and rushing touchdowns (eight). He also has provided an impact in the passing game with 69 receptions for 454 yards and two touchdowns.

Ronald Jones II likely will assume the bulk of the workload in the backfield should Fournette be sidelined.

“Those guys play a huge role on our team, so we have to uplift them and do a better job,” Jones said on Sunday. “Just guys going down and fighting adversity. We didn’t fight through today.”

David, 31, has 97 tackles, two sacks and two forced fumbles in 12 games this season.